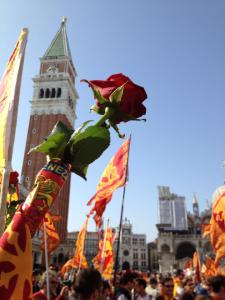 April 25, the feast of liberation, the feast of St. Mark and legends. On April 25, we celebrate the Feast of the liberation of Italy from the occupation by the German army and the fascist government (1945).Men and women of all ages are dead then to grant us the democratic rights of which we enjoy today. Every year in various Italian cities are organized deposition of laurel wreaths at the monument to the fallen, marches and demonstrations to celebrate ,and remember the liberation.

April 25 on a warm spring weather ,in Venice, are organized , from flag-raising ceremony at the “Path of Remembrance”, from the “bòcolo” of love until the military parade in Piazza San Marco, concerts, puppet shows, children’s playground laboratories, trash art, pizzas, lunches and dinners, beers and excellent selection of wines.
About 1200 Venetian participate in the construction of a giant human rose that will decorate St. Marco square.The participants will arrive wearing clothes of red color (which will create the flower), green (stem and leaves.) From the top of the bell tower ,the images taken , will make a highly dramatic effect.

According to one legend, the tradition of the rose “bocolo” evokes an unexpected love between two young people from two enemy families.
A rose , who was born near the tomb of St. Mark, would be donated to a sailor of Giudecca island ,by the name Basil as a reward for his cooperation in stealing the remains of the saint from Alexandria,Egypt. Planted in the garden of his house, the rose became the boundary of the property divided among his sons, after the death of Basil .The time and the nature of human being ,divided into two opposite branches of the Basil family .
Following the breakdown of harmony between the two branches, the plant stopped flowering.
Many years later (an April 25) a love at the first sight was born between a girl from one of the two branches  and a young man from the other branch of the family. The two young people fell in love looking through the rose ground who separated the two gardens.The rose miraculously began to flourish again and the guy take a bushing and gave it to the girl.

In memory of this love, which would restore peace between the two families, the Venetians still offering the red rose bloom “bocoli”to their beloved: girlfriends, wives and mothers.

Due to this tradition ,the feast of St. Mark is also called the Feast of the Blooming Rose (from rosebud)

At the celebration are associated with this some popular legends.
The February 1340, Venice was hit by a terrible storm. The sky remained covered with

clouds, dark as night even though it was the dawn of the day.The intensity of the storm was so strong that threatened seriously the city. To the three at the afternoon the storm suddenly ceased and the waters returned calm .
From this curious meteorological event was born the legend called the fisherman’s ring.

The final episode is depicted in a painting of the sixteenth-century painter Paris Borden, secure in the galleries of the Academy.

(Nobody knows if this story is linked to the Pope’s ring,that it is called “ring of the fisherman,” too,because St. Peter was a fisherman and Jesus made him become a fisher of men.)

The story begins on the “Deck of straw” (or below), ahead of the Bridge of Sighs, where the corpses of the drowning people were displayed, to be recognized by the familiars or friends. An humble fisherman, shelter from the storm under the bridge, suddenly saw a man on the bank of the canal leading to the bridge.With a calm tone, but authoritative ordered him to take him to the island of St. George, in front of Piazza San Marco. Spite of the rain and bad weather fisherman accept it, (it was good practice to obey the orders of noblemen if you did not want to go into trouble ). Once they reached on the other side on board ,get, a tall sword-wielding warrior .He turned to the fisherman with the quiet but firm tone ordering him to go to the Lido to the shore of the church of St.Nicholas. The fisherman look at both of them and think, at least i’m not too tired, and if i oar a bit will pass the cold. He could not say no even if he want to say that.
When they reached their destination, a third man, with a religious appearance of a bishop dressed in ceremonial robes, climb aboard, and gave an authoritative command to go to offshore.

But just after they veered towards the sea, a short distance from the entrance of the harbor,  a terrifying vision appear.

A large ship with black sails, full of demons, was preparing for the assault on the city.The 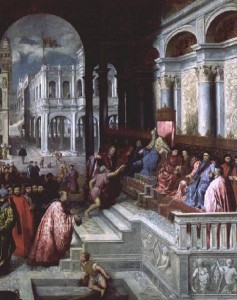 three passengers stared at the horrible scene and made the sign of the cross for three times. Immediately after they saw the cursed ship sink between the terrible screams, while the wind and the rain ceased and the sea calmed.The three passengers ordered the fisherman to come back and let every one of them where they had boarded.

At the “Bridge of the straw”, the last passenger give a final order of the scared fisherman : Now go to your prince and you tell truthfully what you saw today. At his doubt that someone will believe him the gentleman handed him a ring and said: Give it to your doge, and ahead of him and his court will say that we have liberated the city from the flood,which was the work of Devil .The person we met at St. Nicholas was right Nicholas the saint, like the one that had boarded to St. George was George the saint, and that I ,who give you this ring ,i am St. Mark the Evangelist, the master of your city.
So saying, he blessed him and he goes. The fisherman went to the Doge’s Palace. No one stopped him when he went in the right direction boardroom, even if he had never been in those place.No one stopped him when he began to speak ahead of the Doge, and the senators, telling his incredible story.

When the fisherman open his hand to confirm what he said, everyone saw the ring that all knew ,and that for centuries sought, the ring belongs at San Marco.
The ring is still preserved in the treasury of the Basilica of San Marco.
As a reward granted to the fisherman, the Doge gave him and his family the exclusive privilege to extract and sell  to his advantage the sand of the beach of Saint Erasmus island where he lived. From the family of fisherman originated the middle ages “sand sellers” of the Grade city.

from Encyclopedia of Fairy Tale.

Have you ever wondered how much can be for you a good monthly income? What will you do with this extra income? Are you interested to have more free time for yourself, and to be together with your family?   Read more …….