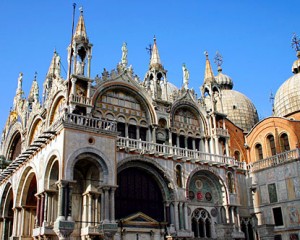 The festival of San Marco takes place on April 25, the date of the death of St. Mark, but on the time of the Republic of Venice were also dedicated to St Mark January 31, in remember the translation of the relics in Venice,and June 25, the date of the discovery of the relics in 1094, the place where was been hidden (according to legend, in  pillar). http://dipoco.altervista.org/venice-basilica-san-marco-stories-reality/

The Basilica of San Marco, one of the most visited and admired monuments in the world, occupies a privileged place in the heart of Venice because ,in addition to honoring the saint patron , every detail is decorated with sculptures and works of art gained as booty in historic victories of the Republic.

The Life of Saint Mark the Evangelist can be read in the Acts of the Apostles, but his death and the theft of the remains are wrapped in mystery. Disciple of the Apostle Paul, follow Paul and Barnabas (his cousin), in Antioch and also

wanted to accompany them to the return.He follow them even in the journey to Cyprus, but when they had to cross a swampy and inhospitable region of the mountains of Taurus, Mark (also called John by Jews), give up and goes back to Jerusalem.Then follow Paul to Rome where he remained in the service of Peter.

During this period Mark wrote down the Gospel narrate by Peter, and become a disciple of him. He was invited by Peter to  evangelize the northern part of Italy. Arrived to Aquileia, the capital the Venetia et Histria region, he met here a citizen named Ermagora and converting him to Christianity, consecrating him bishop of the city. Thus start the evangelization of the whole area.

Direct to Alexandria in order to convert the heathen of the Egypt, on a dark stormy night, the ship was boarded to seek shelter in one of the few fishermen’s huts on the island “called Rialto” . After a frugal dinner with the fishermen ,the saint ,leaned down, and fell asleep. In his dream an angel appeared in the form of a winged lion, who addressed him thus: “On this island, Mark,in a wonderful day, a great city will rise and in this city your ultimate rest will find peace .“Pax tibi, Marce, Evangelista meus.Hic requiescet corpus tuum. “(Peace to you, Mark, my evangelist. Here your body will rest)”. Mark woke up in the morning and told his dream to the fishermen, before setting sail for the Egypt ,where he died.

The relics were kept in the church erected at Canopus, (the second greek port in

Egypt before Alexandria). They were transferred in Venice in the year 828 by two legendary Venetian merchants: Buono from Malamocco and Rustico from Torcello. The route from Alexandria was full of ups and downs, from the need to hide the remains of the saint under a load of vegetables and pork, “because Muslims would not have dared to inspect a similar load”.

Before arriving in Venice at the Calabrian cites ,at Cropani area, the boat arrived in the middle of a storm.The relics were saved thanks to the intervention of the Cropane’s sailors. For this reason, a piece of the remains of the saint, the patella ,is in the church of Santa Lucia in Cropani, as a symbol of gratitude for the help.

The saint’s relics are now preserved on the altar of the basilica of Saint Mark in Venice . The prestige given by the remains of St. Mark in Venice made possible the greatly increase of Venice’s power and independence