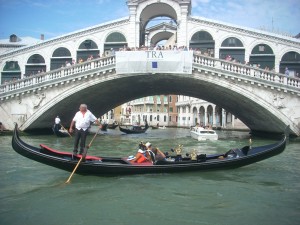 The gondola , the unique boat in the world just 11 meters long and weighing more than 600 kilograms, can be steered with agility and easily by a single person with a single oar, has become , for millions of tourists, the symbol of Venice .

There are reports of an official ” gondulam ” since 1094 , mentioned in a decree of the doge of the time, Vitale Falier,so the origins
of the gondola dates back over a thousand years ago .

The ancestor of the gondola was called “scaula ” and had a lower prow, a higher iron comb “ferro ” , and usually two rowers .

The construction of the gondola continued to evolve until the mid – 20th century , When the city government prohibited any further modifications .

It is as unique as the city it represents, also for its structural characteristics . First is asymmetrical,given that the left side is wider than the right side of 24 cm and , therefore , browse always inclined on one side.
The keel , therefore , is not straight but curved to the right , in such a way that the gondola floats tilted to the right. . This asymmetry causes the gondola to resist the tendency to turn towards the left at the forward stroke and counterbalances the push of the oar.

The the fork,”forcola” is in walnut and is modeled by remer , which also manufactures the oars of the gondola .”Forcola” is of a complicated shape , allowing several positions of the oar for slow forward rowing , powerful forward rowing , turning , slowing down , rowing backwards , and stopping .
The typical comb or iron bow aims to protect the bow from collision and also as embellishment . Its shape has traditionally meant to represent the six districts of Venice : Cannaregio, Castello , Dorsoduro , Santa Croce, San Marco, San Polo ( six teeth facing forward ), the Giudecca ( ​​the tooth pointing backwards) and the Doge’s hat ;the “S ” that starts from the highest point to get to the low point  represents the Canal Grande; the arch over the highest tooth of the comb is the  bridge Rialto.The stern iron “rico”,is much smaller than the thruster and functions mainly of impact protection 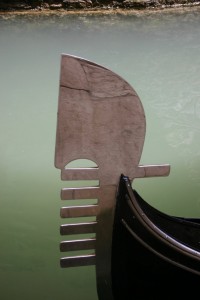 Currently the gondolas are open boats , but until the early twentieth century,were equipped with a removable cabin called ” fèlze .”
The traditional black color of the boat is at the origin due to the use of the usual pitch to waterproof the hull (like all Venetian  boats ) ,besides the black has always been considered an elegant color, and  a suitable means of transport stately .
The gondola is currently used mostly for tourism , but also for ceremonies such as weddings and funerals, as well as a ferry to transport people from one bank of the Grand Canal to the other.It is estimated that there were eight to ten thousand gondolas During the 17th and 18th century .

Per avoid clashes, there is the custom
to warn the voice when you turn in a narrow stream and the typical calls (OHE) have become a characteristic feature of the city.

There are just over four hundred in active service today , virtually all of them used for hire by tourists . 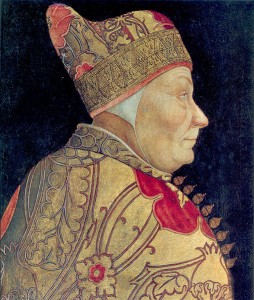 If you want to make a ride you can haggle.You’ll find softer prices back lanes where single gondoliers hang out,rather than the bigger departure points.Estabilish the price and duration before boarding ,enjoy your ride and pay only when you are finished.
If you ‘ve hired musicians (you have to pay an additional)  to hear a Venezian song,don’t ask to hear “O sole mio” wich comes from Naples try to requesting “La Venezia la luna e tu ” and other venezian songs .Gondolas cost more after 19:00 but are also more romantic and relaxing under the moon.Silhouettes gaze down from bridges when window glitter spills onto the blackwater.Tou ‘re anonimous in the city of masks,and the rithmic thrust of your stripped-shirted gondolier turns old crows into songbirds.This is extremly relaxing,and worth an
extra cost to experience at night.