The Casino of Venice

The origin of the word  Casino (small house) provides a clear description of these places: small but cozy and intimate places, where you could meet friends. The first gambling house (the Foyer of St. Moses) was born in Venice in 1638.   http://dipoco.altervista.org/gambling-venice/
In 1946 the municipality of Venice buys Ca ‘ Vendramin Calergi palace, and opens on the second floor of the building, the headquarters of the Venice Casino.

On 1999 was inaugurated at Ca ‘Noghera near the airport ,a new casino, the first American casino opened in Italy.

The Casino of Venice is immediately established itself as the center of entertainment for international notoriety. The heart of the Venice,  beat on the Grand Canal at Ca ‘Vendramin Calergi, site of the classic games casino.

Around 1481, the family Loredan (Andrea Loredan, powerful exponent of the Venetian nobility, a family from were came three Venetian Doges ) built the future casino. The decorations of the interior walls were made from the “most brilliant among the builders of the Renaissance” Mauro Codussi. The walls,  are covered with stucco  (  actually once were decorated with frescoes which were the allegorical figures, painted by Giorgione,the famous painter). But ,in 1581, the Loredan family, in financial difficulties,were forced to sell the building, and after several passages of property, passed to Calergi. In 1739, the Vendramin family, linked by kinship with the Calergi family   became the new owners of the building , and so ,the palace took the name of these two families linked by kinship Vendramin Calergi. 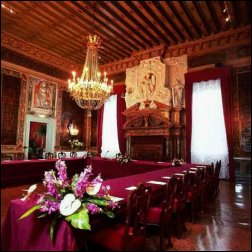 Richard Wagner , is one of the most elegant buildings overlooking the Grand Canal. Ca’Vendramin Calergi  palace has a ground floor , with access to water from the Grand Canal , the main floor , featuring a large central hall and three smaller rooms decorated in the renaissance style. The interiors of the palace are impetuous . From the ceiling frescoes in chiaroscuro (light and shade),with allegories (The Bridal Allegory , painted by Gian Battista Crosato , Venetian painter 1700), leather upholstery golden or crimson damask, faux finishing or white and gray coating, the beautiful paintings ( by Nicolò Bambini , a Venetian painter of the late seventeenth century ) , has all the charm of the Renaissance style . The floors in Venetian style, very hard to find other,” self sustained wooden planks”, like “upturned keels of the boats ” that , by virtue of their particular architecture ,oscillate when walked on.

Near the seventeenth-century wing (called White Wing ) ,to the right side of the building, is a decent garden , also accessible from the canal through a gate whose pillars are topped by two large statues. On the back of the building is a small courtyard , enclosed on one side by a wall, from which , in addition to an elegant entrance is a plaque that commemorates the death of Wagner who :” took place within the walls of the palace .”

Like almost all the palaces of Venice even this has its own deadly story , a terrible crime .

One night in 1658 the three Grimani brothers (sons of Vettor Calergi’s sister , who had married a Grimani ) ,kidnapped Francesco Querini Stampalia , their arch enemy and brought him into the palace . After a series of tortures the prisoner was killed , but the government of Venice discovered the crime, and the three Grimani were banished forever from the territories of the Republic. The rooms of the building where  Querini had been murdered was demolished and in its place was built a column of infamy to commemorate the event .But the three brothers Grimani managed to return to Venice in 1660, paying a  bribe to the Republic ( 7350 ducats to support the war against the Turks ) , rebuilt the rooms destroyed and “all was forgotten”.

Until a short time ago, the beautiful palace Ca’Vendramin Calergi was the winter Venice Casino , but the municipality were allowed to have even a summer casino on the Lido island. The idea of ​the construction of the Casino Lido in Venice was founded in 1936. At Lido was chosen an area close to the beautiful Hotel Excelsior on a former Austrian fort which allowed the use of the  foundations and much of the demolished masonry for the building of the new casino . The Lido Casino  were built in just eight months , inaugurated on  June 30, 1938 and was the last of the great Venetian inauguration of the Fascist era.

The interiors of the palace were decorated with most beautiful light marbles, mirrors, glass and majestic chandeliers . The Casino has a ballroom , a mechanical stage , which ” … installed in the center of the room … was a particular technical innovation by being the first in this genre built in Italy.” This rich Palace functioned as Casino only fifty years after being equipped with heating, air conditioning and security , at the end of the nineties was closed ,for the building of the new Casino of Ca ‘ Noghera .

Currently it is re-opened only at the Venice International Film Festival and licensed for use, for those days , by the Cultural Society ” La Biennale di Venezia .”
Casino of Lido became known in 1984 with the famous robbery made by Felice Maniero , who ensure “the protection racket” of the Casino. When he was no longer being paid , he decided to rob it .

“Felice Maniero, boss of the “Mala del Brenta ” gang – robbery of billions against the Casino of Venice – (il Gazzettino ,the local newsparer)

It was a night in April 1984 , the roulette had closed from  half an hour .
The attak was safe , with the ” sure informations ”  from a croupier bought by Mario Artuso , the cashier of Mala . It was 2:43 a.m. when the commando enters on the ” stage” . The group is made ​​up of seven people. That night wore also ski masks, guns in big quantity and the inevitable M16 gun. They come with a motor boat that is moored at a wharf near the Casino .They climbed over the wall that divides the Palazzo del Cinema (the place of the festival of the movie ), from the garden of the Casino ,and come screaming and showing their arms. The message is clear : this is a robbery and nobody joking . Five of the thugs go up to the third floor while two remain to wach the place. An office boy, a policeman and two controllers the are threatened to lie down on the floor room . On the third floor , in a room were some lingered players of the ” chemin de fer ” .Some rubbers , pushing them , throw them to the ground while others are already going to the chambers of safes . Will “clear” everything and in a few minutes, the bandits left the building with two and a half billion of italian  lire  in cash. ( 1 euro = 1,936 italian lire ).

In 1999 , close to the airport Marco Polo was born Ca ‘ Noghera , the first American-style casino in Italy . A dining tables 1000 square meters offers the best of American games (Fair Roulette, Black Jack and Poker ) . Now also offering important Punto Banco and a touch of the French game with the arrival of the Chemin de Fer and French Roulette . In addition, a poker room dedicated to the ” Texas hold ‘ em” in the form of tournament poker .

The traditional games ( or European ) in use in Italian casinos are: Trente et quarante ,French Roulette , Chemin de fer, Boule , Baccarat . In the year 1980 were introduced American games : American Roulette , Poker and Slots .
Entering the Club is easy: just make a request on the first visit to one of the two seats of the Casino Venezia.The cards and related benefits are issued immediately , free of charge and simple request.

Bad news comes from the municipality that wants to sell the Venice Casino .

” Casino di Venezia , we start with privatization.
Although they get on the casino double or triple its market value , there is nothing that undersell the history, culture and traditions of a territory, of a piece of Italy.One solution would be to put the gambling house on the internet with a broader international system , to beat the competition and maintain the attractiveness resource for tourism , an important city’s economy ” . The motivation …. the casino cost too much to the municipality has not  the alleged receipts. 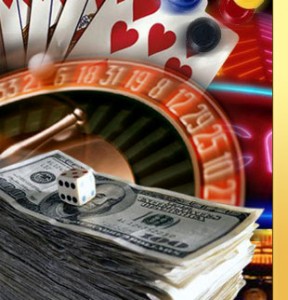 WARNING: The pathological gambling is a behavioral disorder that includes “azzardonella” a diagnostic category of obsessive-compulsive symptoms consisting of obsessive thoughts associated with particular actions or rituals to be performed, which attempt to neutralize the obsessions. The pathological player shows an increasing dependence on gambling, increasing the frequency of play, the time spent to play, the amount spent in an attempt to recoup the losses by investing more of its economic possibilities and neglecting the normal tasks of life to engage in play.