The courtesan Veronica Franco the only daughter of Paola and Francesco Franco was born in Venice in 1546. The daughter of a “honest” courtesan Veronica Franco was started in this art from her mother at a young age and, as she had learned to use her natural talents, she managed to contract a financially favorable marriage .He had three brothers: Jerome, who died during the plague on 1575, Horace and Seraphim, “which is in the hands of the Turks” as she wrote in her testament.  She got married very young with a rich doctor, but the marriage ended badly (in 1582 he was already dead). 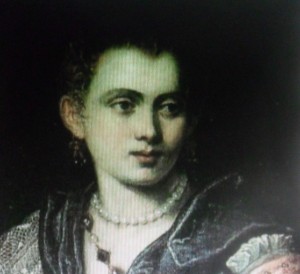 Being a courtesan allowed her to study, to have the freedom and independence while
the noble women could neither study nor take decisions outside of the run of the housework.She could read, be interested in art, poetry, inviting the great intellectuals of that time in her living room . Between all these friendships met Tintoretto who dedicated her a beautiful portrait.The courtesan Veronica Franco, was an complete intellectual : writer, musician, curator of collections of poetry, essayist,and that wasn’t an isolated case. This kind of ” intellectual” prostitute had a selected customer. Among her protectors was Marcantonio della Torre, in charge of Verona, Lodovico Ramberti,from an ancient and illustrious family, Guido Antonio Pizzamano, employed by the judiciary in the “avogadori” http://dipoco.altervista.org/venezia-camerlenghi-palace/ ,the public tax.

For all these quality she became a high-ranking courtesan . Was included in the “Catalogue of most honorate courtesans of Venetia ” (published around 1565 ) , which provided the list name, address and the rates of courtesans of the city , according to which a ” kiss of these courtesan cost five or six shields . ” Thanks to her friendship with the wealthy and prominent members of the time,soon became very well known .

In 1574 her reputation as a high-ranking courtesan reached its peak when Henry III of Valois , making a stop in Venice on July 18 to 28 ( Serenissima welcomed him with 11 days of celebrations , organized by artists such as Andrea Palladio , Andrea Gabrieli, Paolo Veronese and Tintoretto ) , during the journey that brought him back from Poland to France, “chose, to spend a night with Veronica “. In memory of the encounter with the illustrious guest ,Veronica gave him, her portrait (maybe a little colored enamel ) with a letter accompanied by two sonnets :” Come talor dal ciel sotto umil tetto” e “Prendi, re per virtù sommo e perfetto”.” Sometimes from heaven under the humbly roof ” and “Take ,a king for supreme and perfect virtues” . 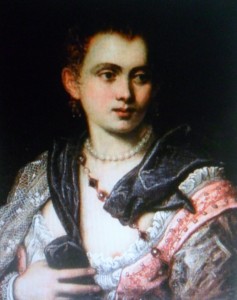 At the beginning of 1570 , became part of one of the most famous literary circles of the city, participating in discussions , making donations and taking care of anthologies of poetry. Related with the intellectual Venetian aristocracy she made ​​friends the famous artists and writers . Assiduously attended the famous literary circle ” Ca ‘ Venier ” that revolved around Domenico Venier , ingenious poet , entertainer and patron of the association , as well as her trusted advisor, and perhaps reviewer of her writings.
Of that academy of virtuous as she calls herself in a letter, were : Gradenigo G. , C. Magno , G. Molin , J. Zane ,as well as Venier : Dominic, his brother Lorenzo , Marco ( often appearing as a correspondent of her ” Loving rhymes”)In 1575 , during the epidemic of plague that devastated the city ,the courtesan Veronica Franco was forced to leave Venice and ,after the sacking of his house and its possessions , lost much of her riches. She appeal the ecclesiastical authority to obtain an an order for delivery by the patriarch .In October 1575 appear before the tribunal of the Holy Office “Veronica Franco public courtesan” , accused of immorality and suspected of witchcraft ( a common accusation to the courtesans ) following the acusations of ,Vannitelli Ridolfo , who testified to having seen her” resorting to witchcraft and demonic invocations to find the goods that had been stolen “. In particular, a practice very much in vogue at the time, called ” inghistara “, done with a jug full of holy water.

The court absolved her, perhaps, by the intervention of Venetian politicians .

At the age 34 seems that she decided to leave the profession of courtesan and to devote herself to charitable works ,as is shown by her Memorial . Veronica Franco wrote two volumes of poetry : “Third rhymes” in 1575 and “Letters to various family members” in 1580. She also published collections of letters , gathered in an anthology of the works of famous writers  After the success of these works , she founded a charity for courtesans and their children . 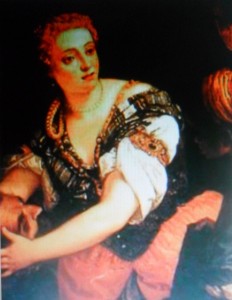 After 1580 is little known about her life, however, the extant documents bear the fact that, even if she obtained the freedom,she lost all the wealth and material goods.
Her death follows from the magistrate’s Obituaries for Health “1591 July 22. Ms. Veronica Franca 45 years with fever already 20 days . S. Moses church. ”

In 1509, Venice, according to the chronicler of the “diaries of Marin Sanudo”, there were 11,654 prostitutes  http://dipoco.altervista.org/venice-history-courtesans/ and a population of about 150 thousand people. About 10% of the population. Even in Rome, the city of the Popes, were approximately 10%, 6,800 in 1490 and 4,900 in 1526. The prostitutes were not only numerous, they were also very visible.