Along the venice history ,the courtesans was tolerated by the normal people but also by the authoriry .In a cosmopolitan city like Venice, with a large passage of foreigners,in addition to trade oriental spices, salt ,silk and fabrics, a very important rate of the Venetian economy was made up of what today we would call tourism. To attract this persons , the Serenissima Republic had cornered a large number of precious relics . But as businessmen and pilgrims they did not live just from the pure spirit .They visited Venice also because they know that the prostitution flourished more than in other cities.

be married or to be nun,” maritar o monacar ” where the wedding could be a far more an iron cage bigger than the monastry.To  marry a daughter was very expensive and even the wealthiest families could hardly afford more than one dowry , so if a daughter married , the others ended up in a convent . A married girl left the house twice a year, at Christmas and Easter, to go to mass , veiled in a way that would not show her face and accompanied by her kin males .
Being a courtesan meant first of all to freely dispose of yourself, of your own body and own time . All this things was denied even to the ladies of higher rank .There were two classes of courtesans : those of lower rank who lived in unhealthy homes and who were frequented by the normal mens ,the ” prostitute da lume ” (of the candle, so called because they were lit a candle in the window to be recognized) ,poor women who practiced much more low rates.

And those of high rank , envied for their freedom ,who had important friendships .The so called  ” honest ” – rich , admired and respected courtesans, often forgot to put the yellow neckerchiefs imposed by the Council of Ten ,because among their “friends” there were also high magistrates of the Republic between many noble men.Their clothes were very elegant ,but was famous their reddish – blond hair ,the famous “Titian red” collor.

The prostitutes , could be distinguished by their color of the hair called ” Venetian red ” ,they wore calcagnini (or chopine ) a kind of clogs with high wedge ( also 50 cm), which made them higher than the other women, their clothes tend rather the manly , as “blouson canvas” ,shirts and trousers for men .

In 1319 died in Venice, the last descendant of the rich and ancient family Trapani, (in Venetian called  Rampani) . He was childless and hadn’t made ​a will ,and all his movable and immovable property passed to Serenissima. One of these houses ,Rampani’s house (in Venice called Ca ‘ Rampani ) were in San Cassiano , between Santa Croce and San Polo, now called the zone of the Carampane .
In the eighteenth century , particularly uninhibited by the moral point of view , thanks to new laws ,who wanted to increase the tourism in the city , the young and beautiful

courtesans were able to return unmolested to exercise the  ancient craft .On the year 1421 the government , exasperated by swarms of  ” public prostitutes ”  that at any time of the day or night invaded the city , decided to transfer them to the homes inherited from Rampani making here the first legal whorehouses from the city, .” The real problem , which the government wanted to avoid , was the increase  the number of homosexuals in Venice ” to become a danger to the survival of the city .” The courts of that time worked hard to punish the ” acts against the nature ” , beheading and burning the unfortunate culprits.
The Senate decided that in these places were allowed to the  courtesans to showcasing their virtues to attract a growing number of men and so maintaining the uses of an heterosexual culture .

The Serenissima republic encouraged the exhibitionism of the “Carampane that to attract customers , they were facing for hours at the windows of their homes showing their brests completely naked, or with the nude legs dangling trough the windows.Sometimes they showed trough the window completely naked to show their beauties .The windows were they overlooked were  the ones on the first floor above the porch , clearly visible both by those who went on the bridge , and by those who transited the river by boat .

The bridge located in San Cassiano , in the area of ​​Carampane , which connect San Polo 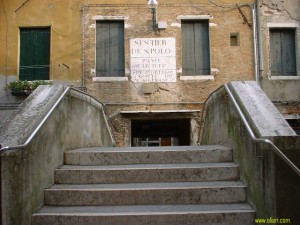 (one of the most picturesque and fascinating district of Venice ) ,and that of the Santa Croce is called the Bridge of Tits (il ponte delle tete ), a name derived from the “landscape” that offered to the passers-by , ( the corresponding channel is called the “Rio of the Tits” ) .

The new residents were called Carampane , and the term became synonymous with prostitute.With the passage of time in the Ca ‘ Rampani remains only the older prostitute.They could continue their ancient craft at reasonable prices , imposed by the Government, but with the absolute prohibition to go out on the street.

The Government issued strict rules regarding their daily behavior of the courtesans.They could get out of the house, but do not stray from the narrow confines of the district of “work” and “at the third bell of the evening” had to return to their quarters,the infringement worth 10 lashes”.

They could not accost customers during sacred days (Christmas, Lent, Easter), 15 lashes punishment;
Could not enter the taverns; in the city center could go only on Saturdays, but wearing an eye-catching yellow handkerchief around his neck as a sign of recognition and Sunday, the day of the Lord, they had to barricade themselves into the homes run by the ‘matron’, who administered the accounting and paid the taxes. ( Thomas Croyat wrote that the taxes paid by the Venetian prostitutes in exchange for tolerance were able to maintain a squadron)