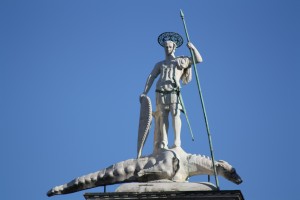 Saint Theodore (Todaro for the Venetians), Byzantine saint and warrior, was the first patron of the city of Venice. Saint Theodore is portrayed in marble,in top of one of collone in St. Mark’s square, killing a dragon, as a metaphor of good conquering devil .The statue is actually a copy. The original is at the entrance of the Palazzo Ducale.

Saint Theodore of Amasya (present-day city of Amasya in Turkey) also known as Theodore Tiro (from the greek word Tyron = soldier) was a soldier of the Roman army , who was martyred for his faith in Christ. He was martyred for refusing to do sacrifices to the Roman gods, and for setting fire to the temple of Cybele, a deity worshiped in ancient Anatolia. He was tortured and then thrown into prison.It is said that the romans offered him even the position of the pope if he left his faith. Teodoro refused, not recognizing,them ,their gods, and testifying that he would not ripped a single word, a single gesture against the loyalty he owed to the Lord.
On February 17,  between 306 and 311 , was burnt alive, on the charge of being a Christian.
A legend said that Theodore did not feel the burn of the flames, he died without pain and gave he gave his soul glorifying God.

He was buried at Euchaite, a town near Amasea, Turkey, a city that, on tenth century was called Teodoropoli (the etymology of the name is derived from the greek word Theodore, “gift of God”).

The “Scuola Grande di Saint Theodore”, dedicated to the first patron saint of Venice, was built from 1580 on the initiative of the brotherhood composed of merchants and craftsmen . At the beginning was guest at the Church of San Salvador.
Here the members of the guild of merchants and artisans met and helped each other in case of need.On the facade of the seventeenth century building you find five statues. On the top is St. Theodore and four angels on the sides.

The sculptures are made by Bernardo Falcon on the second half of the seventeenth century. The lounge was designed and built by Longhena and adorned with paintings dating back to 1600 and 1700 of the Vassilacchi, Jacopo Palma il giovane, Balestra, Bassano.

In 1999 the Venetian Musicians began to hold their concert seasons in the Scuola Grande and it became the most prestigious Concert Hall in Venice.

The relics of the martyr were transported from the Orient to Brindisi, the city of which he is the patron saint (kept in an urn at a reliquary altar of the Cathedral of Brindisi,Italy).

It is presumed a “seizure” of the precious cargo direct from the Orient to Venice.

As a result,in Venice appeared an another Santo Teodoro, no longer a soldier but generally known as Theodore of Heraclea or even as Theodore Stratelate (from the greek Stratelates = lance-bearer). He was tortured and crucified on Sintica Heraclea in Thrace, by order of Licinius (Augustus in 308), and (also) buried in Euchaite near Amasea.
In 1267 his remains were removed and taken to Venice, in the church of San Salvador where he became the first patron of the city of Venice. In the altar of the church there are still the funeral urn of the saint.

Venice celebrates the November 9, as saint Theodore day,the day of the patron of the city until the thirteenth century. A small church dedicated to him and have existed since the sixth century in the area currently occupied by the basilica of San Marco.

Chapel of St. Isidore, located on the bottom of the left side of the Basilica of San Marco. The dividing wall covered in marble that separates it from the original basilica corresponds to the outer wall of the ancient church of Saint Theodore.

This doubling of the Saint Theodore generated a flowering of legends and mysteries to end up with the hypothesis of a single person, who is venerated in different times and places, and that influenced the days of commemorations.

In Byzantine and Venetian icons, the two saints are often depicted together. Sometimes they are represented on horseback and are distinguished because the soldier is armed with a sword. Physiognomy of the two saints is almost identical,being always depicted with short and curly hair and short beard . 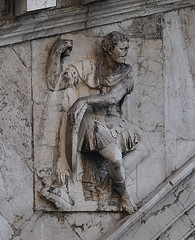 San Teodoro is considered sacred by the Catholic Church and the Eastern Churches . Is considered the patron saint of: military recruits and protector against thieves. In the Byzantine churches ,Theodore the soldier is remembered on February 17 while the General on 8 February. For Westerners instead the soldier was recalled November 9 and the general on February 7.
On the Rialto Bridge, the oldest bridge crossing the Grand Canal,on the Fondaco dei Tedeschi side, are carved figures of St. Mark and St. Theodore, the current and former patron of the city, the Titian Aspetti works.