Great conspiracy of Tiepolo in Venice and the old woman of the mortar.

In 1310 was born a great conspiracy  against the government of the Republic of Venice, led by the patricians Marco Querini, BajamonteTiepolo and  Badoero Badoer.

One of the underpass ( sotoportego), the bridge near San Marco square,are called Dai.That name comes from the exclamation (Dalli), take them, alluding to the conspiracy
against the republic implemented by the noble Baiamonte Tiepolo .Near the present clock tower,in San Marco square, on the balcony overlooking the Mercerie Meridionali (Southern Tailors ) in Sotoportego Capello nero (“black cap ” from the name of an ancient inn), there is a marble relief that recalls the “old woman with the mortar” . On the floor below there is a stone with the date of the event.
In ‘1310, June, a revolt upsets Venice. Three young nobleman :Baiamonte Tiepolo, Marco

Querini and Badoero Badoer turned against the Doge Pietro Gradenigo, and wanted to establish a new oligarchic government favorable to the papacy.
The war of Ferrara , strongly supported by the Venetian aristocrats, made​ the pope lose a city that guaranteed the access to the Po river, as well as the salt marshes of Comacchio.

The Papal aleance (which joined the main Italian states, penetrated Ferrara ,thanks in part to a plague, which reduced the ability of the defense of the city).The Doge Pietro Gradenico is proved adamant in defending the independence of the Republic against the Pope. But this decision poses against a group of old families who considered immoral to rebel against the will of the Pope . The conspiracy led by the three nobles was also unhappy about the fact that the

Grand Council prevented many families , wealthy and ambitious , but lacking the necessary qualifications to participate in government. Meetings held by the conspirators in the Ca’Granda Querini , emerged the need to overthrow the aristocratic government and get rid of the Doge Gradenigo , ” the main culprit ,for the disastrous war with the Papacy , for the excommunication fallen over the city , the  exclusion of many citizens by the government and the arbitrary justice against opponents “.

The action is set for the dawn of Sunday, June 14, 1310. The attack will be given with three troops of armed men.The first two troops , commanded by Marco Querini and Tiepolo Bajamonte , starting from Rialto will attack simultaneously the San Marco Square , the first from the north- west , through the Calle dei Fabbri , the second from the north , across “via delle Mercerie” (the street of the Haberdashers) , surprising the guards of the Palazzo Ducale.
The third troop , commanded by Badoero Badoer , went to pick up people from the areas of Padova, and would return to Venice in boats . 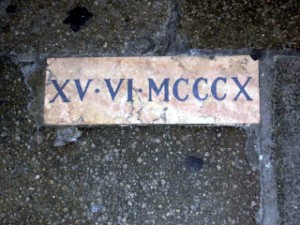 The Doge , warned by Marco Dona , (that after joining the conspiracy , change his mind) ,convene the council and the heads of the great families, alarms Arsenale and ordered the mayor of Murano, Burano and Chioggia to intercept the boats of Badoer . The three troops are not synchronized ,the mens of Tiepolo stops to to pillage the Rialto zone, Badoer is blocked into a storm.The troops of Querini taking ” Calle dei Fabbri”, tip on the Square through the ” Bridge of Dai”. He arrived in Piazza San Marco the first, but was defeated by the troops of the Doge, ready to respond to the attack. Marco Querini (the father in law of Tiepolo), and Benedict ( brother in law), son of Marco Querini perished in the crash .

While the Doge’s guards fight against Marco Querini,the troops of Tiepolo is trapped in the narrow space of haberdashery, before reaching the San Marco square.In this place is consumed one of the most amazing events in the history of the Serenissima:

An elderly woman, widow and poor, whose name was Lucia or Giustina Rossi lived in the

area of Southern Tailors (Mercerie Meridionali), a few meters from the Clock Tower. According to tradition, she was the unwitting savior of the Doge. Worried for the tumult and the shouting, out of the window, the old woman had inadvertently drop a mortar on the head of standard-bearer, the soldier next to Tiepolo, who bore the banner with the inscription “Libertas”, killing him. The fact that at the same time they were attacked by the Duke’s guards, led  them to the idea that the conspiracy was discovered, and caused the general retreat of the rebels.

In gratitude for the old woman who had knocked down the conspiracy of Tiepolo, the Doge himself conceded to the woman and his descendants the right to display on the window the banner of St. Mark’s (Venice’s flag) on the 15th of June and the other solemnity. The woman also asked that the procurators of San Marco, the owners of the house where he lived, and the beneath shop, to maintained the annual rent of the “house from which he had made ​​the gesture that had saved the Serenissima” (15 ducats) forever, to all its descendants.

“The repression of the conspiracy was immediate. Bajamonte Badoer was tried and beheaded, Tiepolo, and its close allies (who enjoyed the protection of important foreign
personalities, the Pope, and many Venetian families of the Great Council) were exiled for four years in Slavonia
It was decided “the demolition of the house of Tiepolo in the parish of St. Augustine (in its place was installed in 1364, a “column of infamy”. Now in memory of the event remains an engraved stone on the corner of Campo Sant’Agostin, with the following inscription: “LOC. COL. BAI. tHE. MCCCX” Here was located the column of Baiamonte 1310), and the
Ca ‘Granda Querini palace,from which remain only two large arches, which in 1339 were incorporated into the new headquarters of the slaughter of Rialto.
The remaining insurgents captured in Rialto were pardoned on condition that they did an
act of submission to the Doge and to the Republic. 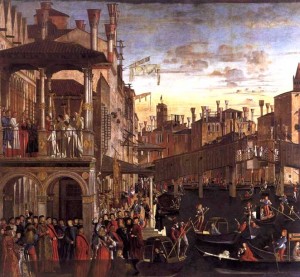 To counteract the new aristocratic conspiracies against the order of the Republic, the Grand Council created the Council of Ten  http://www.infoplease.com/encyclopedia/history/ten-council-of.html  (July 10, 1310), and a citizen militia under the command of Capisestiere, who responded to the call “loose ” of the bells of St. Mark .