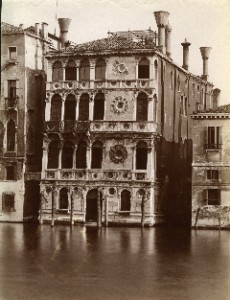 Ca Dario palace is famous for the supposed curse ,that is still over it. The Ca Dario palace is situated ,in Venice ,in the district of Dorsoduro , overlooks the Grand Canal.
All its owners have ended badly ,for the bankruptcy or violent death.The construction started in 1479 by Giovanni Dario (Ambassador to the Republic of Venice) and had to be dowry for his daughter Marietta, promised in marriage to a wealthy spice merchant, Vincenzo Barbaro, (owner of the homonymous palace in Campo San Vio ). The building was commissioned by the architect Pietro Lombardo.

Ca Dario palace, is built over an ancient Templar cemetery and due to a settling of the foundation is visibly tilted to the right. (The foundation is solid, the walls hold up very well – according to the the expertise of the Municipality). The façade in the Renaissance style, with beautiful circular medallions and marbles that decorate it, and with the sides in Gothic style, very popular in Venice.
At the base of the building is the inscription:

VRBIS GENIUS JOHN DARIUS (John [Giovanni] Dario patron of the city), to the fact that in 1479, managed to negotiate a peace with the Turks.

In 1908 Claude Monet use the building as a subject for a series of impressionist paintings. Ca Dario is often described as a “characteristic Venetian palace “, often compared to the Ca d’Oro. Ca Dario palace caught the attention of John Ruskin who described the decorations in his famous “The Stones of Venice”  .D’Anunzio also describes it : “crooked as a courtesan bent under the pump of his jewelry.”

The tragic fate that has followed most of its owners is attributes to a curse, that is in contradiction with  beauty of the palace. After the death of Darius Giovanni (1494 ) , the palace was inherited by his daughter Marietta and then passes into the possession of the Barbaro family until the early nineteenth century.” Marietta , the daughter of Giovanni Dario committed suicide when her husband Vincenzo Barbaro losing its political influence , died stabbed , in the midst of financial collapse”. Even their son died in Candia (now Iraklion , one of the Venetian possessions in the island of Crete ), in mysterious conditions. These three deaths caused a bad sensation among the Venetians who anagramate the inscription on the façade , transforming it in :SVB RVINA INSIDIOSA GENERO ( create insidious ruin ) . 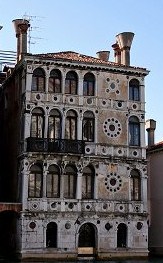 The bad reputation of the building began to take shape in the early nineteenth century, when the descendants of the Barbaro family , Alessandro Barbaro sold it to Arbit Abdoll , an Armenian merchant of precious stones, which shortly after taking possession of the dwelling did bankrupt. In 1838 , Abdoll , was forced to sell Ca Dario palace for 480 pounds to Rawdon Brown , who, sold it four years later, because had no  money to renovate it. After a long period of time Radon Brown, the British scientist who became owner of the building in 1832 died mysteriously , apparently by suicide,together with his roommate.
After the war, Ca Dario was bought by Charles Briggs, an American millionaire, who, was forced “to flee” from Venice because of the continuous rumors about his homosexuality. Taking refuge in Mexico,  his lover committed suicide.

Remained without an owner,for a long time, in 1964 one of the possible buyers was the tenor Mario Del Monaco, but the negotiations broke down when, on his way to Venice to finalize the details of the contract, was the victim of a serious car accident that forced him to a long rehabilitation.

A few years later ,Ca Dario palace was bought by Count Lanze Philip Giordano, who was killed inside , in 1970, by a Yugoslav sailor named Raul Blasich (18 years),with whom he was in an intimate affair. After the murder Blasich, fled to London, where was assassinated.
Ca Dario palace was then purchased by Christopher ” Kit” Lambert , manager of the rock band “The Who” , but his drug dependency worsened and he breaks his relationship with the band , causing its financial meltdown . In 1978 , three years before his death ( falling down the stairs , it was hypothesized suicide ) Kit Lambert sold the palace to a Venetian businessman , Fabrizio Ferrari, who moved there with her sister Nicole, which died in a freak car accident with no witnesses. Fabrizio Ferrari , after a short time , was involved in a financial crash and was arrested on charges of beating a photomodel.
At the end of the eighties , the building was purchased by financier Raul Gardini , who wanted to make a gift to his daughter . After a series of economic downturns and involvement in the “Tangentopoli” scandal,he committed suicide in 1993 in circumstances that were never fully clarified .

The explanation of the deaths , according to some theories , is that Ca Dario palace rise over an alleged negative node of energy that flows through the city . Others hypothesis is that Ca Dario palace is influenced by the talisman designed to ward off negativity placed on the door of the near palace .
But it’s not always necessary to give credence to the legends . In the nearly five centuries of owners , some just have a bad end , among which only one was killed inside the palace . All the others lived their lives in peace. The term ” curse” began to appear only since the nineties , after the suicide of Gardini. Before that the Ca Dario palace was the seat of prestigious events , precisely due to its rich history , which makes us think that there is
nothing evil between those walls .
It is said many things abuot it, for example Ca Dario palace is still inhabited by the ghosts of previous owners.The Venetians believe it . Many of them keep away from the building.

You can found the documented history of the Ca Dario palace at : http://veneziacriminale.wordpress.com/2014/01/27/ca-dario-tra-maledizioni-e-realta-storica/

After the death of Ca Dario Gardini , do not stir up any interest in the market . At the end of the nineties the director and actor Woody Allen seemed willing to purchase the building, but desisted . On 2006, the Ferruzzi group concludes the preliminary round with a wealthy American entrepreneur , who has won Ca ‘ Dario palace, 800 square meters overlooking the Grand Canal , for only € 8 million . There are more than 15 years that is expected these  news.

Ca Dario Residence (not the palace) 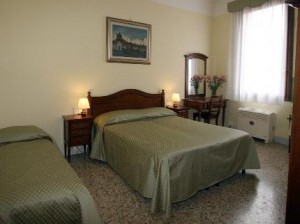 has been recently renovated and from private home was transformed into a cozy guest house that offers its guests comfortable rooms, all soberly arredate. The residence is housed in a former convent and has a private courtyard .Situated about a 15 minute walk from the Saint Lucia train station , Ca Dario Residence offers a range of accommodation in the historic districts of Santa Croce and Cannaregio. The rooms are equipped with free Wi-Fi .It is also located close to the Jewish Ghetto, (850 meters from the residence Ca Dario.)  http://dipoco.altervista.org/venice-the-ghetto-of-the-jewish/  All apartments have air conditioning, kitchenette and satellite TV.