On the day of the festival ,of Saint Mark ,in the square that houses the church recline numerous market stalls, selling the famous “bocolo”, the red blooming rose  traditionally given by the Venetians ,a romantic tradition that no Venetian male ever think of not keep,to their beloved women: girlfriends, wives and mothers. 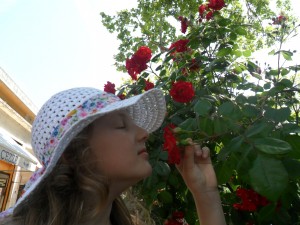 Obviously at the base of the festival  is a legend, that is lost in the mists of time The LEGEND OF BOCOLO (Blooming rose festival on April 25 in Venice) dates back to the times of the Doge Orso I Partecipazio  (864-829), whose daughter Mary became the female protagonist.  Known for her beauty,his daughter, fell in love with a troubadour (perhaps for the sweetness of his words that can make her laugh and dream), but of humble origin, named Tancredi. In the intent to overcome the social class differences, Tancredi goes to war trying to get a military reputation that makes it worthy of a noblewoman. Tancredi left and soon the news of his glorious deeds spread throughout the Christians territories, until arrived to Venice, which now waiting for the return of the young man as a great hero. Perhaps this was the heroic destiny that Mary dreamed for her beloved.

But he was mortally wounded and fell on a bush of white roses. With the last remaining forces seized a blooming rose,  stained with his blood, and begged his companion,a knight, to give the rose to his beloved at Venice. 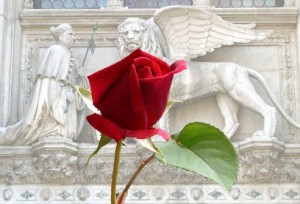 Mary receives the rose on 24 April .Closed in her grief, the young woman retired to his room and the next morning was found dead in her bed, with the bloody rose  on her heart.

If it is true or not, if is an imported tradition, as many traditions that have born who knows were ,and then were imported, is not very important. Beyond the symbol, important is the beauty, and the love,of this Venetian custom .