Each of the three important revolutionaries of 1848, Daniele Manin, Niccolo Tommaseo, Pietro Paleocapa has in Venice the own monument, a reminder of their struggle for freedom. 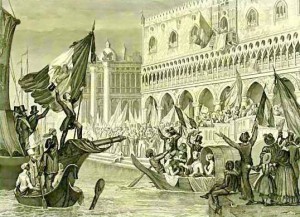 … Republic of San Marco was established in Venice as a result of the uprising of
the city against the Austrian government on March 17, 1848. The Lombardy and the part of Veneto still free, chose to merging with the Kingdom of Upper Italy. Despite Manin and Tommaseo were trying in vain to postpone the institutional issue at the end of the war, Castelli, Paleocapa and Avesani, pushed for the fusion of Venice with them, ratified by 4 July 1848. Manin invited the most loyal Republicans to accept the merger …

The monument to Niccolo Tommaseo by Francesco Barzaghi is located in campo Santo Stefano, in the San Marco sextier . 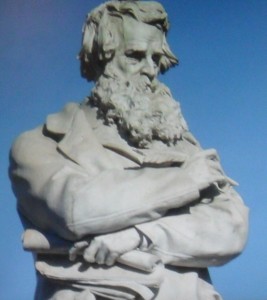 The Venetians have named this statue since the beginning “cagalibri” ( “books pooper”) .The nickname is given by the stack of books put as support below the sculpture, to confer more stability.
The statue of Niccolo Tommaseo ,on a block of Carrara marble ,standing and with the arms folded. Dressed  according to the fashion of the time,reflects frowning between the rolls holding in his left hand.It seems looking for a new idea, and  ready to write it with the writing feather placed in his left hand.

The statue has the resembles of a “prophet” with visible lock of hair and messy beard.The position of the right arm, and the angle of the head was probably the usual pose for Tommaseo as seen in the few original portraits.Three volumes on his back,representing his prolific literary output, are thrown randomly one on top of other, while the fourth was carved vertical, so that with the back comes to wrap the edge of the coat. This winding strengthens the left leg that maybe had problems of stability. 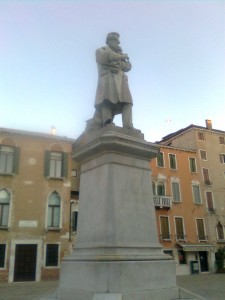 Niccolo Tommaseo
Born in 1802, in Sibenik , Dalmatia (ex Venetian possession, today Croatia), son
of Jerome and Catherine Chevessich. Studied in Spalanto then in Padua and Milan.

In 1827 he moved to Florence where published the dictionary of synonyms. We find him in France in 1838 and Corsica 1839 . Back in Venice in 1840,after an anti Austrian speech against censorship,the press freedom  was arrested, then freed by the people during the insurrection against the Austrians.
He became part of the Government of Danielle Manin, of the Republic of San Marco in 1848.It was minister in the interim government, and ambassador to Paris.
After the capitulation of Venice in 1849 took refuge in Corfu then in Turin, 1854.
He died in Florence in 1874, in poverty and suffering, ill with syphilis that leads to blindness. 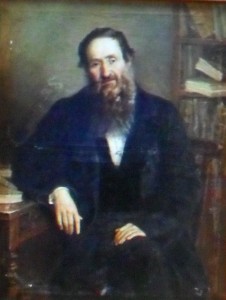 For the Italian lexicography writes: New thesaurus of Italian (1830),
Dictionary of Italian language (4 volumes). Within studies, ethnographic collection
“Folk songs Tuscan ,Corsicans, Illyrian and Greek” (4 volumes). Other works: The Perticari refuted by Dante (1825), Commentary on the Divine Comedy (3volumes ), Bible Stories and Meditations on the Gospels  (1970), The holy Gospels.

“Faith and Beauty”, is considered by critics a premature attempt at psychological novel.