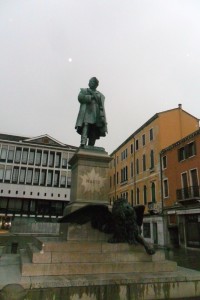 Made by Luigi Borro (https://it.wikipedia.org/wiki/Luigi_Borro),in 1865, the statue faces the house where Daniele Manin had lived .The plaque exposed above the house number 2313 recalls that Daniele Manin was born in Venice in a house overlooking over the Rio di San Luca, with the view of the former Campo San Paternian, now called Daniele Manin.
Two bronze sculptures complete the monument: a lion, who sits on the steps,
with large wings outstretched and, above it, the statue of Daniele Manin. The figure is shown standing, leaning on his left foot. The right arm is bent and the hand is hidden on the clothes,a gesture of a man of command .The left hand grasps a roll:The Decree of the Venetian Assembly that in 1849 announce the resistance of the Europe “at any cost” to the siege of the German army.

Daniele Manin, born on May 13, 1804 ,son of a modest lawyer, Peter and Anna Maria Bellotto. His grandfather with Jewish origin had been converted to Catholicism changing the name from Medina to Manin, to pay tribute to the Doge Ludovico Manin the last Doge of Venice.
On 1840 he start the political activity against the Austrians but in 1848 was arrested. On March 17 was released together with Niccolo Tommaseo.

the monument with his ashes,near the basilica di san marco,venice

On March 23, 1848,is nominated President of the new Republic of Venice,and helped to found the National Italian Society . After the capitulation of Venice on August 22, 1849, Manin fled to Marseilles then Paris.
He died in Paris in September 22, 1857. His ashes rest in Venice, beside the Basilica of San Marco.
Monument to the patriot Pietro Paleocapa.
By Luigi Ferrari (http://www.treccani.it/enciclopedia/luigi-ferrari_(Dizionario-Biografico)/)
on 1873 ,the monument to Pietro Paleocapa initially was placed in campo St.Stephen. Today you can admire it at the communal gardens called Papadopoli.

The particularity of this monument is that the figure is not standing, frontal, ,as the most of the statues of that age.Paleocapa is sitting, in comfortable and informal attitude, with one hand resting on his leg. 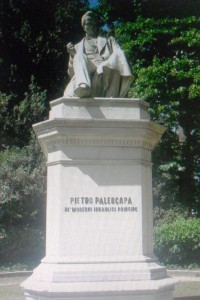 Pietro Paleocapa was born in Nese, Bergamo, in November 1788 by the family of ancient Greek origins.
After the Ottoman conquest of Crete (Heraklion) in the seventeenth century, his family moved to the Venetian republic.

Participates in the Napoleonic wars in military units of genius, of the Italian Kingdom.He was taken prisoner in the fights against Germany in 1813 but managed to escape and return to Italy.

At the fall of the kingdom of Italy, he withdrew in civil activities by working as a hydraulic engineer on the rivers Brenta, Bachiglione, Adige, Tisza and for the arrangement of the port of Malamocco, in the Venetian lagoon.
Becomes minister of the provisional government of Daniele Manin in 1848. After the end of the Republic of San Marco moved to Turin, where  was elected as member of the Italian parliament of the kingdom  and minister of public works in Casati ,D’Azeglio and Cavour government . He was a proponent of the annexation of Venice to Piedmont.

By http://dipoco.altervista.org/ -Cercodiamanti
If you search something to change your life. You must decide whether to take action or stay at the point where you are .
All you have to do is to ask a simple question:

Explain to me the whole business?
It will be an honor for me to be your coach in this path if you’ll allow me.
(Mail: [email protected] .it)