The problem of water in the early settlements 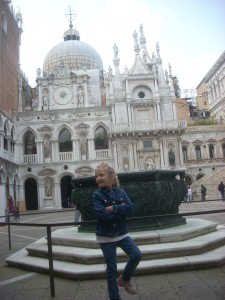 During the barbarian invasions , the few inhabitants of the islands and coasts, were facing their needs of water with the ” rainwater collection .” With the arrival of entire populations fleeing from the mainland running from the continuous invasions ,the water supply becomes a major problem – was not enough rain water but they needed also water deposits . First of all was necessary to have a collection surface sufficiently wide around the well itself, towards which converge the rainwater : for this reason the Venetian fountains are located almost exclusively in the wide fields or courts .
The first natural wells were created by digging a pit in the sand, where the water came from groundwater through a hard layer of clay , which was located in the basement.In that way” the Venetian wells” borned .

The excavation was generally below the average of the sea level (5-6 meters), the walls were covered with a layer of clay of 50-60 cm. In the bottom, at the center of the excavation was placed a slab of stone on which is built the barrel .A series of open channels , were placed along the perimeter of the tank ( i cassoni ) .At the top of the box- there was a vertical element the connector ( la Piela ) , covered by a stone slab ( the seal ) with small holes ( i gattoli .) The floor was tilted towards the “gattoli” , and the end was (la vera da pozzo) the fountain head used both as a parapet and support to the pulley with which the Venetian women drew water with buckets .
Some of these were obtained from large “capitelli” from old Roman constructions .

Many Venetian wells have inscriptions or bas-reliefs relating to the family who had taken charge of their construction .

At the beginning of the fifteenth century Venice reached 1000 000 inhabitants, ( the first places among the most populated cities in Europe). Plague of 1348 reduced the population to one third. The fear of water pollution,inhibited the use of the fountains ,and searching other sources of water :the fluvial source( the Brenta river ) .
A series of laws of 1425 diverts the rivers flowing into the lagoon away from Venice,
and for reasons of pollution proibited to the boats to climb in places closer to Venice.
The boats( burchi ) equipped to bring drinking water ,were filled from the river with a kind of slide and they can approach under the barrier between the lagoon and the river.The watherman ( Acquaroli )- carrying water from Brenta river to Venice with barges , have had the task of filling the public wells and prevent the theft of the water from them. 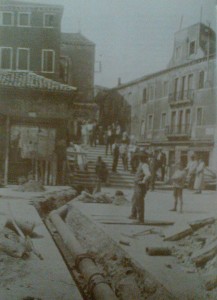 The water problem in Venice today,

There are dozens of springs scattered in the fields and squares of Venice . But one of the most frequently asked questions is as follows: ” You can drink the water of the fountains in the city? ” . The answer is definitely “Yes .”
The water that falls from the fountains is potable and tastes better than tap water . Fountains of Venice receive water from groundwater coming from the high Val Padana .

The fountains in Venice are distributed throughout the island city . Almost every field has ,or had , a fountain, often accompanied by a well or even popping out from the well.The number of the old wells is estimated to be much higher (157)  according to the historical memory of the people, but not all working  .

One of the reasons is the consumption estimated for the fountain which is about 2,000 euro / year each, and because of rising costs the Municipality has reduced the output pressure from the fountains through a reducer but due to the unfortunate phenomenon of a whitish spot on the cast-iron column and a certain difficulty in drinking , that leads anyway to an expense cost for only the historical center of 74 000 € / year (only wather usage) 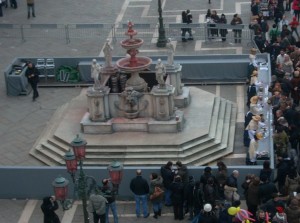 But don’t worry the Wine Fountain will save us..At the opening of the carnival of Venice, we toast with an abundant red wine that flows from Wine Fountain ,set up in Piazza San Marco .