Venice – The rules inscribed on the stone 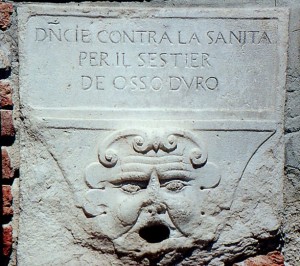 The rules regarding the daily life of the Venetians, were inscribed on the stone to confirm that the respect for the citizens and the consumers was on the first place , and remained stable over time.
On the year 1300 many of the laws of Venice provided the “protection of minor child workers” , the “separation of interest between doctors and pharmacists” even an “institution of public health service”, and a set of rules at the vanguard of justice and the public institution .

In 1542 it was decreed a law that established that the acceptance of complaints “were cited” only if there was at least three witnesses to testimony the facts .(see the article ” Mouths of the Leon” ) http://dipoco.altervista.org/venezia-mouths-leon/ 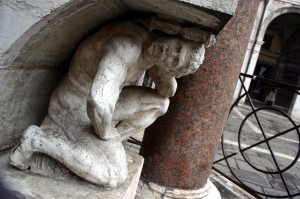 ” Gobbo di Rialto” was used as a podium for the official proclamations : “the statutes “of
Venice or “the name of the offenders” would have been proclaimed by an officer standing on the block , he had to read the same laws standing up on the “Pietra del Bando”(stone of the notice) near Piazza San Marco.

Regarding the rules inscribed on the stone at the Rialto Market in the ” market of the Fish” , is a plaque with the ” minimum dimensions of the fish”  that were sold , to safeguard the fishing, and , at the same time make uniform the price of this food consumed in big quantity in Venice.The same type of plaque is located in campo Santa Margherita ,(Saint Margaret champ). On these stones are engraved the rules for fishing , the size of the fish and the mollusc propper size to be sold. 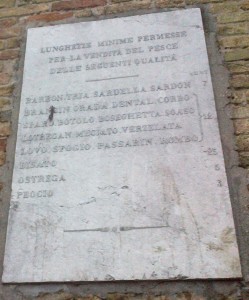 An other stone , located in Campo SS. Apostles , with a great ” lion moleca “(see San Mark’s leon) ,engraved at the top, determined the quality of bread and flour which were to be used,giving an precise definition to this staple food.

Even today, on the banks of some rivers you can see a “C” which means ” common sea ” – conventional reference -which coincided with the top of the ” greenish- black ” strip caused by the oscillation of the tide along the banks of the chanals.The buildings were built ” three feet over common ” – safe from flooding. 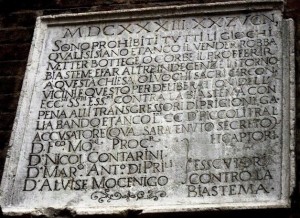 Other stone plates were used for the moral life of the citizens, urging not to blaspheme ,
(  the Serenissima had Catholic religion, but his government was secular ! ) .

In the resort Moranzani (7.68 km from Venice, near Malcontenta ) , named after the Roman name ; Maurentius ,there was a place of control to collect the toll of the duty of the boats that sailed on the river Brenta.In this place we can see two marble slabs where are carved the old rates of transit.The locations becomes an important point of transit for the “Burchiello boat” (see the wells http://dipoco.altervista.org/venice-the-wells/), barges and commercial boats, carrying the necessary food to the cities and towns. 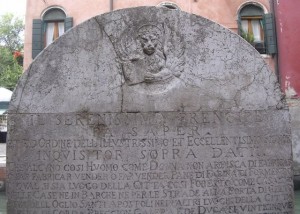 It’s wonderful still reread those rules on these plates ,that remember you a very careful Republic ,to its environment, and its citizens who willingly accepted rules and laws , which were not allowed to seek or cheat others! 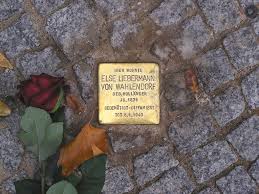 A few days ago on “Campo del Ghetto Nuovo” in front of the Israelite Nursing Home, the place from which 21 guests were deported to the Nazi concentration camps , have been placed , the ‘ stumbling blocks ‘, with name and surname of the victim deported and died in concentration camps .