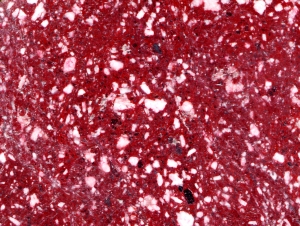 The Basilica of San Marco in Venice is the main church of the city,  and one of the main monuments of Piazza San Marco.On the floor of the atrium in front of the main entrance , the lozenge of red porphyry,is the exact spot where the emperor Frederick Barbarossa (Emperor of the Holy Roman Empire),knelt before the Pope Alexander III  .After the peace of Venice ( 1177), Alexander III recognizes the independence of the Republic of Ancona, who had so tenaciously resisted to Barbarossa in 1174,  the city in exchange recognized to the pope the right to an levy and annual income.

The ancient red  porphyry comes from Mons Porphyrites, and had origin from an volcano ,about 630 million years old. The dacite-andesite composition led to the formation of large effusive layers of material, tuffs and ignimbrites.

At the corner facing the San Marco square is “the stone of the call”, a trunk of red porphyry column  whence the “commandador” read the laws of the Republic and the calls to citizenship.
Overwhelmed in 1902 from the ruins of the tower of St. Mark, “restrained the fall of debris and prevented that they hit the delicate columns from the corner of the Basilica. “

Difficult to work with because of its hardness – it seems little used at the time of the
pharaohs – but is certainly the most important and expensive stone . Before to become a symbol of luxury ,the red porphyry ,had personified the symbol of divine power the representation of nobility, prestige and wealth.

At the corner of the basilica of San Marco towards the square, in a block of red porphyry height of about 130 cm, are engraved the figures of  “the tetrarch”, the two Caesars and two Augusti.” The four figures are dressed in a richly decorated armor,covered with a cloak and a  little headpiece fell on his forehead. The left hand holds the sword, the right hand of one characters is laid in a formal gesture of embrace on the left shoulder of the other “

The solemn faces and, red porphyry,used in the ancient world to symbolise the emperor and his family, show the imperials characters .The left statue on the east side has a missing fragment of foot (found in 1965 among the ruins of Philadelphion in Istanbul, looted in 1204 during the expedition “diverted by the Venetians”,on the Fourth Crusade)

According to some scholars, the red color of the red porphyry is due to the presence of piemontite widespread in rock according to others , most reliable,to the high concentration of iron oxides.

The Head of Carmagnola 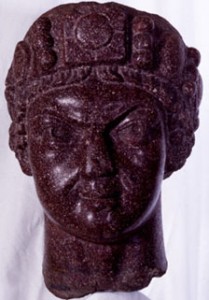 The image of Carmagnola is associed with the head of red porphyry placed in the balcony of the basilica,(San Marco ) stuck on the pillar of the balustrade in the southwest corner .This head,severed at the base of the neck,should perhaps serve as a warning for the people.

“Francis Bussone , called Carmagnola ,was a captain-general of the Venetian Republic ; found guilty of treason and connivance with the enemy  , was beheaded in 1432. The accusation is unjust for this captain,because he has dedicated all his military capabilities to Venice. His head , however, must be exposed to the people,according to the custom ,triggering ,in the popular imagination a legend,remained alive for a long time .”

In fact, the head ( red porphyry) come from the sack of Constantinople during the Fourth Crusade in 1204 .As large as the original, has a hole on the top of the head  to hung it to the wall. The large eyes framed by arched eyebrows had once filled of glass paste , while the heavy ornament of the crown mimics inlays of precious stones and gold plates .
Due to the facial features and headdress the most accepted theory, (based on a comparison with the gold sovereign coins minted between 534 and 538 in Constantinople and with the mosaics of San Vitale in Ravenna ), seem that it is the ” head” of Justinian I,the last Roman emperor of the East.

As to the origin of the head, many scholars have thought it could have been taken by the Venetians from Philadelphion ,the square of Constantinople.