The Martyrdom of Bragadin inflamed the spirit and was among the reasons that led the Christian fleets to fight like lions to the victory , after two months at Lepanto.Noble man Marco Antonio Bragadin , Governor of Famagustaa (city on the east coast of Cyprus) and Captain ,Commanding a legion of six thousand men devoted to defense  that city, was flayed alive by the Turks soldiers and his skin stuffed with straw and sewn .

Venice had declared war on the Turks , and the Commander and his soldiers were able to
stand up more than ten months of siege of the garrison by Lala Mustafa Pasha . Bragadin knows what mean surrender,and the fate has befallen Nicosia, (the ancient capital of Cyprus ) after the surrender : 20,000 people exterminated in the horrendous methods; women ,rather throwing themselves from the rooftops than fall into the hands of the victors, two thousand children and girls sent to the slave market of Constantinople. 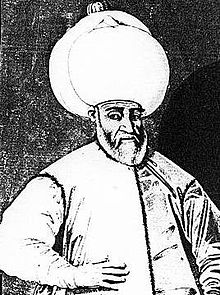 He was convinced that reinforcements would soon arrive, but several problems hinder the Serenissima to rescue their troops . The soldiers were now , worn out by hunger and hardship , and constantly under destructive attack.With less than five hundred able-bodied men and the population starved the commander asks peace at the Turks.
They conceded to Bragadin extremely favorable terms of surrender described and signed by the two leaders in a” parchment gold branded” (2 August 1571).In according to the agreed “Will save the lives and property of all , evacuation in Candia of those who want, and freedom of worship for those who had remained ” had to be a decent surrender .Three days after the surrender Bragadin followed by a group of officers and soldiers went to camp of the Turks to hand over the keys to the city . Lala Mustafa pretends courtesy for three days , then with a pretext stops the whole Christian garrison . The turkish commander is in fact furiously,he took over 11 months to crush the resistance ,has lost 52,000 men , including his eldest son : everybody were beheaded and the heads of the soldiers piled up in front of the pacha’s tent , while those of ufficials were hanged on high spears stuck in the ground .To Bragadin expects an end even more chilling dead.”The Commander was kept alive for another eleven days then (August 17, 1571) Lala Mustafa ordered to crush and whip him, forces him to run two times the perimeter of the city loaded with a  baskets full of stones and dirt on the wounded shoulders ,forcing him to press his mouth on the ground at each step in front of his throne. It does so hang on for hours at a pole in the harbor, so that all Christian slaves and prisoners at the oars can see the terrible fate of their commander . Lala Mustafa asks him to abjure the cross and embrace Islam . But Bragadin refuses with the little strength he has left .Finally,he was strapped to a 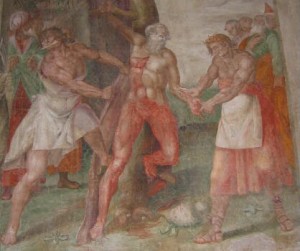 table,and there the ears and nose was severed , as well as undergo other mutilation , and after that it was quartered , and his limbs were thrown , while his skin was filled up with straw and sewn up , as a kind of dummy , and run along the streets on the back of an ox , together with the heads of Alvise Martinengo , Gian Antonio Querini and Andrea Bragadin( his brother ), and then hoisted on a ship that parties to Constantinople.”

Only after fifty days the fleet of the Venetians and other Europeans managed to reach an agreement to join forces and defeat the Turks. With the furious Battle of Lepanto in October 7, 1571 the Christians won a great victory.
Years later the Venetian merchants with the help of a Christian slave manage to steal the

remains. The Commander’s skin returns to Venice in 1576 ,stolen from the Arsenal of Constantinople .
At first the skin was taken by the Church of St. Gregory , but on May 18, 1596 a monument was dedicated to him in which was buried an urn containing what was left of the heroic governor.
That peoples soffered terrible atrocities , and inhuman torture but with their “martyrdom” have contributed over the centuries to make Venice “the Great Serenissima “well known throughout history !
Today his skin is preserved in the Basilica of Santi Giovanni e Paolo in Venice, (

considered the Pantheon of the Venetian Doges ) and venerated as a relic , although the Church has never elevated Bragadin to the glory of the martyr where his place is.