The  Mary’s feast days “Festa delle Marie” was born at the beginning of the ninth century ,( on February 2 of each year) , to thank to the Virgin Mary for her intercession and to commemorate the victory over the pirates.The Mary’s feast days  seems to have been introduced in the year 943 and being continued during the Carnival  .

Originally,on February 2,the  blessing day, was celebrated the marriages of twelve poor and beautiful girls (two for each district, renamed for the occasion Mary  “marie”) , at Saint Peter’s Basilica of Castello. The ceremony, had been set up to help those who were in financial need and to increase the marriages in a town with few inhabitants.

The marriages were possible thanks to the donation made ​by the nobles of Venice and the Doge’s kindess  .It was an well known the custom that the Doge lend to the girls beautiful jewelery and gold from the treasury of the city. The gifts were brought in the specially built wooden boxes called “arcelle” or “capsellae”.The “Marie” went in the procession , marching in the

embellished boats  ( also well known Bucintoro,the doge’s boat ),ran through the canals of the city, attended religious services in the principal churches in Venice ,participating to the dance,music and refreshments organized by  the citizen.The doge , followed by the nobles accompanied the brides in St. Mark’s Square, here he handed them “the blessed candles “and invited them to a banquet in the Palazzo Ducale (the Doge palace).The ability to get close to Marie was considered a good omen , as well as an opportunity to Venetians and foreigners to see wonderful women , wearing beautiful clothes with rare and highly prized ornaments .

On the year 943 , during the  celebration of ,the marriage of the girls, the Istrian-Dalmatian pirates, kidnapped them ,with the intention to reduce them to slavery, and to steal the “arcelle” with the precious jewels .
After the initial disbelief and the general confusion,a squad of armed Venetians leaded by the Doge Pietro III Candiano goes to chasing the pirates. They reach the pirates at Caorle , attacked and killed them all,their bodies were thrown into the sea.The twelve girls and their precious gold were rescued . The Doge also decided that the place where this happened this bloody episode was called “Port of Damsels” ,(young girl) a name that still remains.

Over the years the number of the Marie has changed several times . 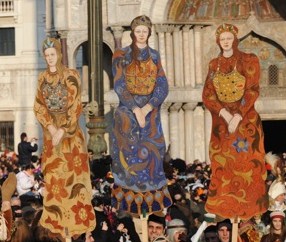 However, along the time the Mary’s feast days, also created quite a stir : it often happened that the girls about to get married were courted , and raped by men who came to see them.Starting from 1343 the twelve beautiful maidens in ” flesh and bones ” were only twelve wooden silhouettes painted  the Mary of wood “Marie de tola ”  to which the people often challenged to throwing stones and garbage.For this reason in 1349 was passed a law who prohibiting to throw objects towards the wooden silhouettes ( the punishment was jail ) .The term “tola” in the venetian dialect became similar with a flat women without breasts.The term ” marionete ” puppet comes from small puppets called ” Marie Wood ” (or ” Marion ” when larger) , names inspired by “Marie de tola” term. .

In 1379 the Celebration of Marie was suppressed , to be resumed ( after seven centuries ) in 1999, with some variations . 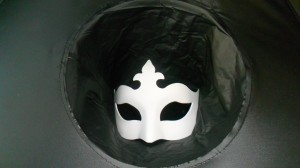 Nowdays the Venice carnival opens each year with the parade of the  Mary’s  feast  days. In the penultimate day of the carnival in a public contest is choice the most beautiful girl from the 12 girls , and the next day will be proclaimed the ” mary of the year ” .The winner will be the protagonist of the ” angel flight ” at the next carnival.