The Carmagnola’s head, is assimilated to a red porphyry head placed in the loggia
of the basilica of San Marco, stuck on the pillar in the southwest corner of the balustrade. 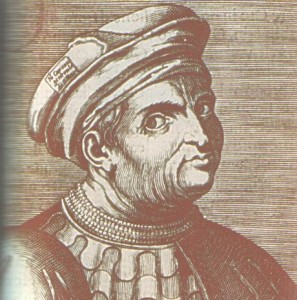 Francesco Bussone, called Carmagnola, was a captain of the Serenissima Republic. Found guilty of treason and alliance with the enemy,  was beheaded in 1432. The charge is unjust for this captain who has dedicated its military capabilities to Venice. But his head must to be exposed to the folk according to the custom, triggering, in the popular imagination a legend remained alive for long time.

In fact the head in porphyry is comming from the sacking of Constantinople during the Fourth Crusade in 1204. Regarding the apartenence of the head are various proposals. The most accepted theory today is that it is from a statue of Justinian I, last emperor of the Eastern Roman Empire that reigns 527-565. Born in Carmagnola (Turin province), from a poor peasant family, Brussone Francis, one of the greatest soldiers of the fourteenth century, was the protagonist of one of the most mysterious betrayal of the history of Venice. He chose the nom de guerre “Carmagnola”, the name of his country of birth .The emblem of its name were three lambs who remember his humble origins. 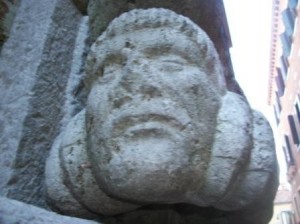 Actually receives the title of Count,but not of Carmagnola region as suggested Alessandro Manzoni in his tragedy -the Count of Carmagnola-1816.

He began his career in Pavia in 1411, fighting for Visconti family. He manages to defeat their enemies , gaining the feud of Castelnuovo Scrivia, the title of Count and the hand of Antonia Visconti.From that moment Carmagnola removed from this noble shield the three lambs and replaced them with the snake and the imperial eagle and the title of Vicecomes. Under the jealousy and criticism of his rivals,the relations with Filippo Maria Visconti becoming worse. The Duke entrusting him governorship in Genoa, recently recaptured, an exile of fact. For Carmagnola was an evident sign of distrust and loss of power.Breaking the relationship with the Duke, Carmangola goes with few faithful solders in Savoy.But Amadeus VIII refuse to accept him.

Isolated, betrayed and dispossessed of his assets, Carmagnola pointed on Venice. Serenissima hired him; named him “Captain General of the coalition Venetian-Tuscan” and quartered in Treviso .Here, the Duke of Milan try to kill him by poisoning but without success, because the attack was discovered.

Francesco turn back to fight against Visconti, making alliance with Florence, Ferrara, Mantua and Monteferrato.At Malcodio (October 12, 1427) Visconti was forced to surrender .Sforza try a last stand but was wounded and forced to take refuge in Soncino. Carmagnola not chase him . Venetian army made many prisoners on the battlefield.

Amoung them was Carlo Malatesta,lord of Rimini, Fano, Cesena and Fossombrone. .
Carmagnola received after the fight, a palace on the Grand Canal and the lordship of Castenedolo in Brescia.After the peace ,signed with the curse of the Pope, the Venetians, dissatisfied, found guilty Carmagnola for not chaseing Sforza’s army, suspecting the intention to betraying in favor of Francesco Sforza.In early January 1429, justifying the recovery of his family members, the Count asked the release of his contract for one year. The Senate did not believe him and the 10th of the month rejected the request, hiring him again with a thousand ducats a month for other two years. 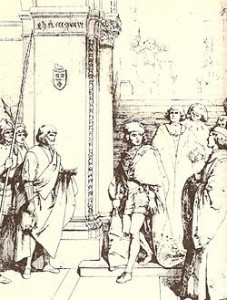 The capture of Carmagnola

During the siege of the castle of Sconcio , Carmagnola falls into an ambush, losing more than six hundred horses. Then he was accused of non loyalty when he was not able to succor Nicolo Trevisan, and then Cavalcabo -who fought against the Milanese and were defeated by the lack of support. With a ploy Carmagnola was called to Venice , arrested and tortured in Palazzo Ducale. It is said that Carmagnola confessed his betrayal under the torture. On May 5, he was led into the square .At the presence of his wife and four daughters, with a gag in his mouth was beheaded. the lion and the snake

On the portal of the bell tower of the church of San Polo are two statues: the one on the right, is a lion showing a decapitated head .Some say that it is of Marin Faliero, http://dipoco.altervista.org/the-council-of-ten-in-venicefornarettos-story/ , but others say that it is the head of the Count of Carmagnola. That is proven by the lion on the left,symbol of Venice, clinging in mortal combat with a snake, a symbol of the Visconti and Bussone .