Opened in September. 11 , 2008, the bridge of the Constitution, better known as “the Calatrava bridge “cross the Grand Canal from Piazzale Roma to the railway station Saint Lucia .The structure is steel, the floors (made of glass of Saint Gobain) , Istrian stone and Classic Grey Trachit from Montemerlo . Even the railings are made of glass , ( a beautiful idea of​the transparent glass ), with brass handrails .Inside the handrails are installed LED bulbs that draw the ray of light in the glass railings .
A modern design ,but stylistically not fits with the environment of Venice , even if is built from  glass and marble from Istria, the most widely material used in Venice.But the artwork changes our mind about the aspect that has to have a bridge ,and this one is very different from the other works,that made famous the architect, the essence of discretion, a span from one side to the other without cables or other kind of support . 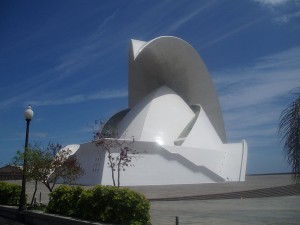 Santiago Calatrava was born July 28, 1951 in Benimamet near Valencia, where attended the School of Art and in 1974 he graduated in architecture.

Aboutt 94 m length, and with 22 thousand passers per day, ​​the stairs of the bridge handicraft made became sensitive and suffer continues damage,because the stairs ,unique and delicate,do not hold up to the weight of thousands of trolleys and suitcases.

The Spanish architect Santiago Calatrava is famous worldwide for his dynamic style and majestic at the same time, for the daring projects related to engineering (bridges, especially), and for such works as the Art Museum of Milwuakee, the James Joyce Bridge in Dublin, the high-speed train station and the highway bridge in Reggio Emilia.
A distinctive feature of the figure of Calatrava is the constant search for different forms of expression, attention, toward the exact sciences and engineering as well as to the plasticityand the aesthetics of form. From time to time “architect-sculptor” or “architect-engineer”, Calatrava league, in a game of references, the basic elements of his research: design, architecture and sculpture. 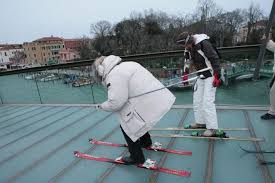 The design of the stairs is not for a normal kind of stairs,(the highness of a normal step we are habituated is 16 -18 cm); the double of length of some steps fool the eye when is going down ;the humidity of the lagoon and the use of glass for some parts of useable stair make the bridge very slippery.That led the tourists, distracted by the beautiful landscape, to fall , the fall being an continually motive of complaints to the municipality ; until this time (late 2013) 5000 complaints.

Calatrava’s style combines a visual conception of architecture interacting with engineering principles, his works are often inspired by the forms and structures found in nature. He also designed several railway stations.Most of his works are located in Switzerland, Germany, France, Spain, Canada. In Italy Calatrava has made three viaducts along the new axis of Reggio Emilia, the fourth bridge over the Grand Canal in Venice, the city of sports in the university area of Tor Vergata in Rome.

some of the architectural works: 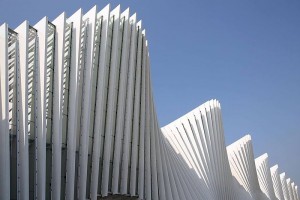 On february 2011 ,four young from Jesolo , two boys and two girls, have passed the Constitution Bridge ( Calatrava ) by car ( a VW Polo) and then they parked the car in Campo San Geremia and went to take a trip to Venice.
When they returned , they found the police officers , who took them to the police station ,
where they tried to explain the reasons for the action . 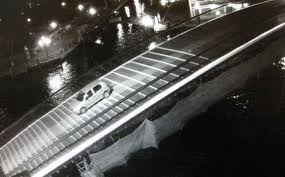 The driver and two of his friends, a boy and a girl , who were part of the group, were charged with driving in state of intoxication, and drunk and disorderly ( examinations have revealed a high alcohol level ) while a fourth component , a girl, was not charged,being sober .

The mayor noted that the first checks have revealed no particular damage to the bridge, and then, after expressing a very hard opinion on an ” unbalanced gesture ” , ends with a joke:
” It was a further test for the bridge .” 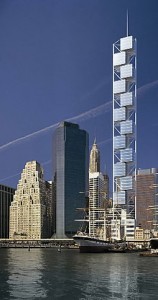 One of his most recent projects is a residential skyscraper composed of twelve terraced houses stacked in the shape of a cube one on top of the other. The terraced houses go up along a central axis according to a scale so that each of they have their own roof. The design of the townhouse in the sky attracted a very rich clientele , willing to pay the
large sum of thirty million U.S. dollars for each cube. It will be built in New York in the financial district opposite to
East River .