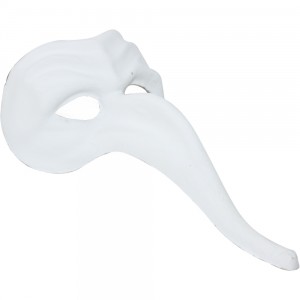 Venetian carnival masks are the representative objects in Venice, because it shows the spirit of Venice projected towards the transgression and fun. The carnival masks were worn in many occasions and for many months of the year. In the eighteenth century, Venice enjoyed the reputation of having the world’s most famous Carnival, where participated all social classes, and carnival mask representing the trick for the great magic of the collective meetings.The “comedia dell’arte” and carnival masks:

A traditionally character in the historical theater  “Commedia delll arte”, Colombina has become one of the most famous Venetian carnival masks .This mask is completely handmade ,from paper mache , a very light mask ,was perfect to wear , to the masquerade ball and on other carnival festivities.Born in Venice was unique female mask to penetrate in the midst of so many male characters .
As the character of the “commedia dell’arte” Columbine, the clever servant girl, very fond of her mistress, was cheerful and wise , crafty, lovely, lying, mischievous and pungent.She wore a cap of all the colors with some pretty curls comming out , a blue and white dress that stand out from the blue skirt and red stockings . Usualy has an apron with large pockets where she tuck love notes.She has also a blue bow on the buckle of the shoes. 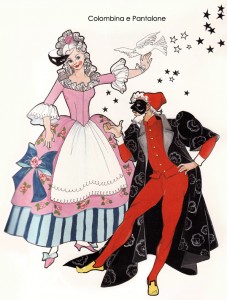 On the scene, is often the wife or girlfriend of Harlequin , but she is often the subject of attention from the master Pantalone,or by his friends which provokes jealousy toHarlequin.

Masks for carnival – Jester ,or Jolly ,

is a specific form of clown well known in the Middle Ages. Starting from Italy , Jester moved across Europe , acting in the theater in Spain, Holland , Germany, Austria ,

England, and especially in France. Origins of the Jester is suppose to come from the west prehistoric tribal society . Pliny the Elder mentions a royal Jolly ( planus regius) recounting the Apelles’ visit to the royal palace palace of the Hellenistic King Ptolemy I. Jester was a symbolic twin of the king. All the clowns and fools in those days were regarded as special cases whom God had touched with a childlike madness, a gift, or perhaps a curse. People with intellectual disabilities sometimes find employment as behaving in a fun way , doing comical flips and jumps . In the harsh world of medieval Europe , people who may not be able to survive any other way found thus a social niche where they were protected.
Jesters wore typically brightly colored clothing in a motley pattern. Their hats were especially distinctive; made ​​from rags,on the head, they were a floppy with three points, each of which had a bell at the end. The three points of the hat represent the donkey’s ears and the tail worn by earlier jesters . Other things distinctive about the jester were his incessant laughter and the mock scepter, known as a bauble or Marotte.Well known for his witty banter, or his fun personality, the mask Jester reminiscent of the eccentrics jokers who have kept the king and all his men in a cheerful mood,in the Middle Ages.
They were known in the Middle Ages, for their ability to really work with the crowd to “make people laugh” with the most fun tricks.
Carnival masks -Pulcinella

a classic character with the origins in the “Commedia dell’Arte” of the sixteen century . The face mask was black and white ,with a white coat , and his hair loose and disheveled . Comming from Campania ,Pulcinella, expressing the soul of the people of Naples has become a symbol mask in the theater. Its main feature which acquired its name , is his extremely long nose , which resembles with a beak.
Pulcinella name come from the latin word ” pullus gallinaceus” , which led to the word ” Pulliciniello ” and ” Pulcinella “, which means chick , to emphasize the comical tone as a hoarse cackle . Its traditional temperament is to be mean , vicious and cunning : the main mode of defense is to pretend to be too stupid to understand what’s going on , looking for gimmicks to escape the oppression of the powerful,or the greed of the rich men. His secondary mode is to physically beat the people . Is extremely entangled in the 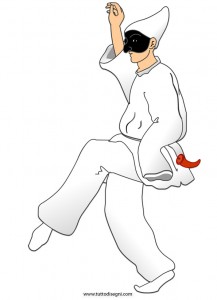 most minute problems of food, basic necessities that sharpen his wits and his imagination . Little desire to work and a lot of fun , it is always busy looking for solutions to accomplish this his goal. Like many others, characters is a servant in all the spectacles.

In the eighteenth century it was transformed into a puppet . In 1600 Pulcinella was “adopted” by the British under the name of Punch, the English variation of the Punch and Judy. 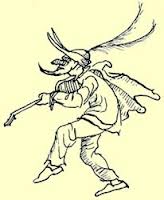 A venetian word ,is a version of the name John ( also called Gianni,Zan , Zane , Zuane ) ,a very common name in the Lombardy,the Venetian countryside ,from where came most of the Lombard ancestors emigrated to Venice to work as servants,for the nobles  and wealthy Venetian merchants .Zanni is the archetype of the comic servant characters of the Commedia dell’Arte . Opposed to the Magnificent ( the teacher, the old name of the Venetian mask of Pantalone ), the role of Zanni is very variable : silly

, naive, and vulgar, doubling in the two types of smart and silly servant , Zanni was a character in its own right and who lived his own life . But once inside the city environment, Zanni becomes crafty , cunning , and bold .Strongly tied to the land , to the rural life , the symbol par excellence of the crude and vulgar character of the peasant,but often remains poor , constantly hungry . Zanni ‘s costume is a white coat and pants,a normally dress worn by peasants during the work in the fields , a particular hat off around the head , but especially with a long visor , a bit like that of goliards college a few decades ago. He wore a black mask that resembles his more popular descendant , Arlecchino .