..near  Rialto bridge, Camerlenghi Palace is the only palace on the Grand Canal from where you can see the “Canalazzo  ” (the old name of the big channel )  from each of its (five instead of four) sides.

It was place of financial magistrates, including the “Consuls of the Merchants “and ” Sopraconsoli of Merchants”. Due to this important economic function, the ground floor of the building facing towards the Grand Canal was the prison for insolvent debtors ,( for that, the edge of the channel in front of the palace is called “Fondamenta de la preson” the prison’s dam). The exposure of prisoners on Rialto was used as a stark warning to those who passed.
The chamberlain,(camerlengho) , was the public cashiers of the Republic ,who superintendents the activities of collection and redistribution of income. “The chamberlain of the council” was the person prepared for the administration of large amounts of money available to the powerful “Council of Ten” for its oversight secret activities

It was the great Doge Andrea Gritti, enlightened man , whose name still stands on a commemorative inscription on the façade , to begin the work almost contemporary of the bridge reconstruction (which was previously wooden drawbridge, to allow the shift of ships with tall masts and barge ).It was built between 1525 and 1528 to a design by Guglielmo dei Grigi , inspired by Codussi and Lombardo (two of the most famous Venetian sculptors and architects of the sixteenth century).

One time this building looked more sumptuous , the facade was embellished with different   precious and colored marbles because of the important role played . Today we see only a reflection of its former magnificence , and most of these designs have been lost over the time. The windows that open across the front facing the Grand Canal are arched , separated by pilasters and adorned with friezes
The interior of the building were of great wealth,once, and this was due to the custom established for all the Venetian magistracy , which at the time of leaving office , the judges leave as a gift to the building a picture with a religious theme on which it was visible its emblem or a portrait.A large amount of paintings, often of great value, soon came to adorn the offices ( still are evidence of this use of the finest portraits of  ” Avogadori ” that you can find in the Doge’s Palace ” Avogaria de Comun” ) .

In 1560 , on the day of St. James,a thief, G.Battista d’Orazio della Terra di Lavoro, was accused of having entered the palace Camerlenghi and stealing a treasure ;a chest that contained eight thousand ducati.Like punishment was cut off his right hand and was hanged in Rialto . “ 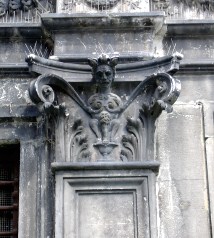 …But the austerity of this building  seems a bit tempered by the particular decoration the two pillars at the sides of the entrance , which may appear somewhat ” licentious ” : on one side a man with “a paw scratch instead of the genitals” and the other, a woman sitting with “ her vagina on fire “.
The popular tradition links this representation to something that happened during the long work for the reconstruction of the Rialto Bridge ( between 1514 and 1587 ) , when a man and a woman arguing about the extreme slowness with as the work proceeded , one exclaimed , that the bridge would be finished when there would come a fingernail instead of his genitals and the other,an old woman , when her vagina was burned down .
The Venetians , ironic and always lovers of the jokes, immortalized them as well . 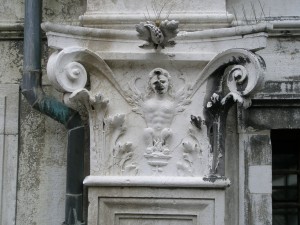 Unfortunately , with the fall of the Republic, in 1806 the collection and the works
ended up divided between the Pinacoteca di Brera , Modena, several state-owned stores and Vienna.Some of these works have returned to Italy but were no longer placed in their original location, but some are over the Gallerie dell’Accademia and other adorn the walls of the various rooms of the Giorgio Cini Foundation on the island of San Giorgio.
Today, passing near this ancient building ,we think that is a marvel , as it can still challenge the stigma of time , given the uneven pillars that give the idea of a precarious stability and to be always on the verge of surrender , but apparently. The design criteria were thus severe as to have given an excellent strength to the building , that even today we can admire it.

After the fall of the Republic of Venice, the building housed over the years , the Court of Appeals , Office of the State Property and registry. Currently in the Palace of Camerlenghi is the seat of the Court of Auditors, thus continuing the old tradition  of the judiciary and financial reporting.