The porch Falier  recalls the figure of the doge Marin Faliero (that at age 60 he became doge of Venice 11 Sept. 1354 ) , and that 17 april was beheaded in 1355 for having conspired against the Republic.

On the main hall of the Palazzo Ducale,in  the Grand Council (Sala del Maggior Consiglio) ,is a frieze with portraits ( imaginary , because those previous to 1577 were destroyed in a fire) ,of the first seventy-six Doges of the Venetian history (the others are in the room of the ballot  “dello Scrutinio” ) .

On each cartouche that each doge keep in his hand are painted the most important events of his “Dogato” . The Doge Marin Faliero , who attempted a coup in 1355 ,is represented by a black cloth with the writing: «Hic est locus Marini Faletri, decapitati pro criminibus» condemned to be beheaded in life .Condemned to ” damnatio memoriae ” , meaning the total cancellation of his name and his image as a traitor to the Republic .
The history of the Republic of Venice reminds us  the facts.

For those times Venice was one day in glory , and the next day was devasted because of the rebellions of the conquered peoples ,and the international politics.

In 1289 the Doge Pietro Gradenigo, instituted a series of new regulations, called «Serrata del Maggior Consiglio». Venice was transformed into an oligarchy, were could only access the members of the leading families of patricians or nobles, like counselor, which lasted throughout his life. The Doge was thus chosen among the very important families of the city. The law guaranteed the political and economic strengthening of the few chosen.and the intention was to avoid the transformation of the Republic into a dictatorship or a principality.

In this context, a young son of a wealthy and powerful family, the Faliero, (His parents

were James Faliero and Thomasine Contarini); Marin Faliero,  skilled in politics and “knew how to drive in diplomacy with great capacity”.

Born around 1285, Marin had grown up under the teachings of his uncle, an intriguing and clever businessman, who belonged to one of the most illustrious patrician families of Venice , Faliero was the fact that in Venice was called “member of an ancient House of patricians”,and probably, had come into the lagoon from the town of Fano,from the Province of Pesaro and Urbino , the region of Italy called Marche.
The future doge Marin Faliero began to make part of the the Great Council in 1303 and quickly demonstrate the ability to drive the political machinations ,often using violent solutions.After Avignon was sent in Istria to quell the riots made by King Louis of Hungary, then in Genoa to deal with the Doge Giovanni Valente, then to administer the powerful city of Padua, a fief of the Republic and then at Constantinople, appointed to treat with the Emperor John Palaeologus, from which tore an alliance against Genoa shelling out twenty thousand gold ducats . It was always consumed by the constant intrigue and greed for wealth, “he had no peace either in body or spirit ” though already appeared the problems of the age.

Appreciated for his political intelligence and experience , on the death of his predecessor,Andrea Dandolo, September 11, 1354 he was elected Doge of Venice. He had turned sixty years old.

Shortly after ,the Doge Marin Faliero found himself the responsibilities of his new role.Between 1350-1355 Venice passed thru a delicate moment. Not only the war with Genoa, but the previous war with the Veronese and the terrible plague had created serious financial difficulties,with a sharp increase in the number of poor people. Pope Innocent VI wanted a meeting peacemaker among nations, the people were suffocated by a thousand fees, the Turks were threatening businesses,the Dalmatian towns were in turmoil. But what worried him most were the persistent palace intrigues, the hatred between the noble families.
Highly ambitious man, probably not quite satisfied with the function of  Doge ,Marin Faliero conspired to ensure the domination of his family who, after him, could continue the supremacy with his grandson Fantino.

Became convinced of the need for such a coup ,even some people said that the final push

to take action has been brought about by personal motivations. A Thursday evening on the feast of the ducal palace (1355 fat Thursday), the future Doge Michele Steno would be addressed  offensive remarks to the younger wife of Marin Falier. Sent away from the party he and some young people;  Peter Bollani, Rizzardo Marioni, Moretto Zorzi, Micaletto by Molin and Maffeo Morosini, revenge themselves by writing on walls offends against the doge’s wife  “Dogaressa”  and the nephew of the Doge.
Of these insults, two in particular are remembered by the historics:“Marin Falier, da la bea muger, altri la gode lu la mantien” (Marin Faliero with beautiful wife, others enjoy her and he respect her as wife) and “Beco Marin Falier della bela moger, la mogie del doxe Falier, se fa foter par so piaser” (Horned Marin Faliero .The beautiful wife of the Doge Falier is getting f..ked for her own pleasure).

Steno (the future Doge) was condemned to ten days in jail, Bollani and Marioni a week). 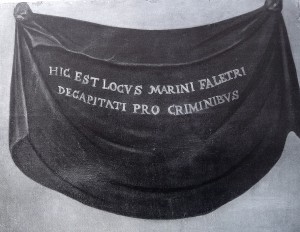 For these and other reasons, the Doge convinced the Admiral of the Arsenal,Bertuccio Isarello, owner of many ships, to be the leader of the revolt that was preparing .He secretly organized the heads-company that had to control and guide the popular uprising, the father of the admiral, Filippo Calendario, stonemasons, and owner of barges, and a rich furrier called Vendrame.

The design is simple.To break into the Piazza San Marco ,occupy the Doge’s Palace and kill all the members of the various Councils. Then turn to the houses and eliminate the rest of the noblemen . Carried out the massacre , Marin Falier would be designated as the ” the Lord of Venice.”
But the spies, that weren’t lacking in Venice , informed the government of the Republic ,

( others say that Vendrame , perhaps thinking that the games are made , confides to a friend, Nicholas, nobleman from Lion , to wich anticipates that during the night will be a ” big deal ” , a riot act to overthrow the Republican government . Or that he was betrayed by two conspirators Beltrame Bergamasco – a furrier and Marco Negro who wanted to
avoid outgoing in the day fixed for the uprising. Beltrame was awarded 1000 ducats , but the sum seems him insufficient , and start to complain. He was exiled for ten years, and reached in Hungary, was killed by the conspirators who had escaped from Venice ).
On the evening of April 15, 1355, when the revolt had to start , the Doge was arrested, as well as the conspirators..The next day ,after summary trials they were sentenced to death .Hundreds of rioters. Throughout Venice there wasn’t a sufficient number of Executioner for such a job: it took eight days to make judgments.
Bertuccio and Philip Isarello Calendar are hanged to the red columns of the loggia of the Palazzo Ducale. 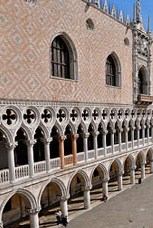 On Friday, April 17, was convict the Doge Marin Falier, not present. “He is guilty of high treason and sentenced by a unanimous vote to be beheaded. Considered a traitor to the Republic”.Marin Faliero was beheaded on the first landing of the main staircase of the Palazzo Ducale ( at the other end of the Scala dei Giganti), where the Doges made usually the oath. His body will be exhibited for one day in the hall of the judiciary Piovego (combination of 4 different courts), “laid on a mat and with the head to the toe.”

The corpse will be put first in the church of S. Giovanni e Paolo,    http://dipoco.altervista.org/saints-john-and-paul-venice/  then in a box of stone placed inside the Chapel of Our Lady of Peace “Cappella della Madonna de la Pace “(hereinafter, emptied and removed (1812), and used as a water reservoir in the pharmacy of the Civil Hospital).

By decision of the Council of Ten, the bell used to warn the people ,gathered in the square ,that the judgment against the doge Marin Faliero was performed, never to be played and to be placed, without clapper, in the church of San Marco.
In 1366 the Council of Ten decreed to hide the image of the Doge ,in the hall of the Great Council, with a blue mantle with epitafo “Hic fuit locus ser Marine Faletro beheaded pro proditionis crime ”  “This was the place of Marin Falier beheaded for treason. ” After the fire in 1577 that destroyed the Ducal Palace, between the new painted portraits of the Doges (by Jacopo and Domenico Tintoretto), instead of Marin Falier portrait was placed a black cloth with a written slightly differently: «Hic est locus Marini Faletri, decapitati pro criminibus»  “here is the place of MarinI Faletri beheaded for crime”.

Although the Republic has tried in every way to erase the memory , Marin Faliero has 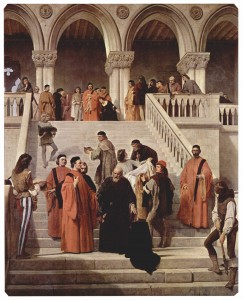 become without doubt one of the most famous Doges of the world .

The Council of Ten declared public holiday the day of St. Isidore (April 16 ), in which Marin Falier was sentenced to death. All future Doge personally attended every year at the public ceremony in Piazza San Marco, who remembered the tragic event , as they have already celebrated San Vio ( St. Vitus, June 15th) , the day on which the conspiracy Querini – Tiepolo had been annihilated.( ironically Marin Fliero send to death many of the conspirators ) .
Some say that he was cursed : The news of the appointment of the Doge Marin Faliero reached him while he was in Avignon,Ambassador of the Republic from Pope Innocent VI. On October 5, he arrived at Fusina , where he boarded the Bucentaur to arrive at San Marco; But here , as the historical Sanudo told, “was a bad omen ,” the fact that the ship , due to fog , stopped right in the middle of the pier of the square , so that the Doge’s procession had been passed between the two columns of Mark and Todaro,   http://goitaly.about.com/od/thingstoseeanddo/a/venice-Saint-Marks-Square.htm  where they usually carried out death sentences .