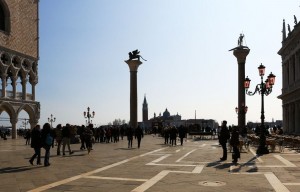 The two columns of the Piazzetta San Marco, with the statues of St. Theodore and the lion of St. Mark, had to be originally three, but the third column was lost with the ship during the landing.
After have been discharged the two columns remain horizontal for over a century. Nobody find a way to raise them vertically.
Thanks to the ingenuity of Nikolaus Stratonio, a builder of Bergamo, the two columns find the right location.
Nicholas was already known as the creator of elevator counterweight, with which it was possible to build the bell tower of San Marco, and as a builder of the bridge “della Moneta” ,the first version of the Rialto Bridge, (the name of the old bridge of the Coin “della Moneta” derive from the old building in which were minted the coins of the Republic,situated at the eastern end of the bridge).

The method used was called “water on the ropes” ,and used the particularity of the strings of hemp that, when wet, increase in diameter and decrease in length.

With the basics of the columns fixed, he tied the peak with the ropes.The ropes ,passing along the column , were fixed then to the ground at a distant point .
Wet the ropes, these are shortened enough to raise a few inches the columns, and to put shims under it.

It is said that the Government of the Serenissima decided to reward Nicholas, giving him the only license for games of chance. He could manage a gambling den for the game of dice, until then strictly prohibited throughout the city. 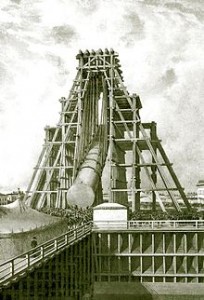 But this concession has a clause .From that moment Stratonio Nicholas becomes Nicholas Barattiere ( Barattiere -the man who practice or keep a place of barratry).

The place where they could exercise these games was , between the two columns of St.Mark’s Square, because in that place very often was erected the scaffold for executions .The two columns was shunned by the citizens,so the flow of customers was very low.
In the memory of the origin of the name on the family blazon,the Barattieri have three dice.