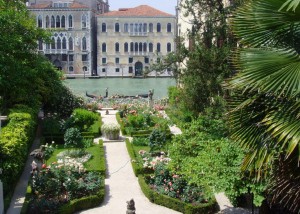 In the hidden gardens of Venice are authentic green masterpieces :  palm, boxwood, creeper,oak, fruit trees along with flowers from distant lands with different cuts, mazes and effects of “Oriental rug” who create real works of art. In addition to the “necessary” gardens ,here, arose along the centuries the ornamental gardens as the Byzantines one ,with their central well or French gardens of the year 1700.

One time Venice was surrounded by green fields destined for cultivation or grazing of animals (hence the origin of the name “campo”,meaning field), but over the centuries, these areas have been covered by sheets of trachyte used for flooring the city’s green space, reducing it to 120 thousand square meters.

But behind the facades of the palaces in the courtyards of the monasteries there are still some small vineyards,greenhouses, hidden nooks, scattered throughout the city. In Venice there are (still) more than five hundred gardens.
Have different origins: those that are part of ancient monasteries, those who belonged to the aristocratic homes or those for agricultural use, and each has its own peculiarities. Some of them have been developed vertically,and you can see it from the outside walls only if “you go with the head up”. Some of them are open only during special events; in others you can emerge freely.

In the past were well known the gardens of Erizzo in San Canciano, the Zilioli and Coupons ,Sant’Angelo; Michieli ,of San Gervasio and Protasio;Testa ,of Cannaregio. At Giudecca is reminiscent of Dandolo, the Gritti, the Vendramin and Loredan, while those of Murano propriety of Morosini ,  Corner and Navagero  .

Important and extraordinary is the Garden of the Fondazione Querini Stampalia (Stampalia is the name of the Greek island that was a stronghold of the family until the early sixteenth century),situated in Campo Santa Maria Formosa, created and designed by the architect Carlo Scarpa. 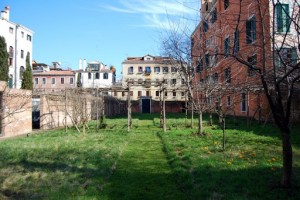 This time the main element is the water, which, by the channel on which faces the building, enter through bulkheads, run along the interior walls,and ends in a large tub in the garden at multiple levels of copper, cement and mosaic and in a small channel to the ends of which there are two mazes of alabaster and stone .Carlo Scarpa has transformed the typical Venetian courtyard reinterpreting Arabs and Japanese models. At the center of a geometric turf is a cherry tree, a magnolia and a pomegranate.Pathes of vines and bushes , decor plant, accompany an ancient well-head, a Gothic lion and two fountains.

The garden of the Palazzo Giustiniani-Brandolini (Venetian residence of Marie Brandolini d’Addala overlooking the Grand Canal). Created by the owners at the end of the nineteenth century, is hidden against the curiosity of the tourists with an artificial thicket of laurel and yew. The boxwood draws a magic design on the background, and the facade of the building is completely covered by a wisteria centennial. This grove was one of the largest among those of Venice.

On the right side of the Palazzo Vendramin Carlengi , (called white wing),there a decent garden, also accessible from the canal through a gate whose pillars are topped by two large statues. On the back of the building is a small courtyard, enclosed on one side by a wall, from which, in addition to an elegant entrance is a plaque that commemorates the Wagner’s death “within the walls of the palace.”

The lovely rose garden of Palazzo Cappello Malipiero Barnabò , unfortunately, is granted to the gaze only beyond the balustrade in Istrian stone overlooking the Grand Canal . At the
scene of the garden, from the end of 800, contributes significantly the statuary, with the most representative: the fountain with Nymphaeum of Hercules, and the great Neptune inserted into the opposite part of the garden. The use of boxwood,with its dark and intense color tones and the skilled pruning, accentuates the theatrality. In the garden, the great 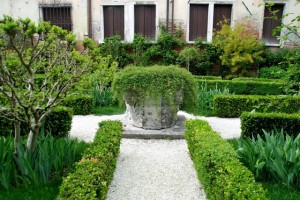 well,with the weapon of Malipiero,is testimony of the union of families Cappello and Malipiero , which are depicted on the bas-reliefs : the couple, Caterino and Elizabeth.

Ca ‘Zenobius, Dorsoduro – (Fondamenta del Soccorso 2596). Behind the nineteenth century Venetian Baroque palace was transformed into a romantic garden, with paths, bridges, hills. Today, the complex belongs to the Armenian Congregation Mekhitarist and can be visited only during cultural events and receptions.

The garden of “Cà Morosini del giardin”  retains the typically Venetian features ,with a garden that blends with the vegetable garden, among flowers and fruit trees. The vegetation varies from ; passion flower and  hydrangeas to roses, irises, petunias, snapdragons, mimosas, dahlias, palm trees, apricots, figs,   persimmons,  pomegranates, olives and cypresses. It is located in Cannaregio,( Calle Valmarana , 4629), and is run by the Dominican Sisters.

Even the palace of Ca ‘Rezzonico, which is just a few minutes away from Campo Santa Margherita, now home to the Museum of Eighteenth Century welcomes us with an amazing garden with wellhead ,boxwood with pergola covered with wisteria  . 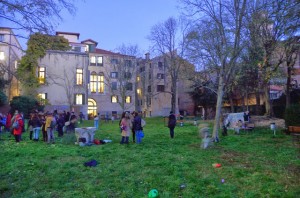 That of Contarini Dal Zaffo is one of the most famous Renaissance garden of Venice, frequented by artists and writers who gathered at the Casino of the Spirits. His fascination shots the poet Gabriele D’Annunzio who dedicated it some pages. It is reflected on the waters of the north lagoon, and is located in Cannaregio, (Fondamenta Gasparo Contarini). Casino of the Spirits (Fondamenta della Misericordia) and the Island of  St .  Michael, not far into the lagoon  are part of the Palace complex.

On the islands the men of faith  surrounded the buildings by greenery:

St. Erasmus island, the largest island of Venice, for centuries has maintained its agriculture with the cultivation
of asparagus lettuce, artichokes, cardoons, the jujube, and vineyards.

On the island of San Giorgio Maggiore, a plot of 3000 boxwood plants reproducing the

name of the Argentine Jorge Luis Borges, one of the most important and influential writers of the twentieth century, as in an open book. It is a maze designed in the ’80s by Jorge Luis Borges in the courtyard of the Cini Foundation. In addition to the boxwoods are the flower beds with the botanical species of lilies, roses and camellias that inspired the legendary fabrics designed in the beginning of 1900 by Mariano Fortuny y Madrano, in the  the textile factory of Giudecca.

In the spaces of convents and churches, next to the flowers like lilies and roses are: the palm, the fig, olive trees,small vineyards, and the purple clover.
On the island of Giudecca, the Capuchin friars grow olive trees and vines, fruit trees such as apples, peaches, figs, vegetables and herbs once used in the pharmacy. A grove of elms, cypress and oak trees characterizes the near twentieth century garden overlooking the lagoon.

At Redentore, you’ll discover a balance more austere in the garden with the vegetable garden, strolling around the kiwi vines, roses and herbs . You can also visit the back of the Church of the Redentore looks like a mosque with two minarets, the library, the refectory and the two cloisters.

In the beautiful gardens Bauer Palladio ( Giudecca island), the former gardens of the friars of the sixteenth century,there is an particular Annabelle hydrangea with white flowers, roses and hibiscus and the oldest magnolia in Venice.

Ca’ Zenobius on the Giudecca, is also home to the garden of a vibrant Swiss lady ,proceeds from the land of an old furnace. Here you can admire 600 square meters with many varieties of daffodils, old roses and clematis,
The parks and gardens open to the public in Venice are: Pinewood St. Helena, Napoleon Gardens, the Gardens Groggia, the Papadopoli Gardens, the Royal Gardens and Savorgnan Gardens.

Some public parks still in existence, dating back to the twentieth century, as the Papadopoli Gardens, which open their doors to visitors who arrive from Piazzale Roma. Once covered an area of 12 thousand square meters had a collection of exotic plants that evoked wonder and awe in travelers.Among the enchanting plants are: tall stem, fruit trees and mulberries.

The Royal Gardens are located south of the Piazza San Marco. Were built after the 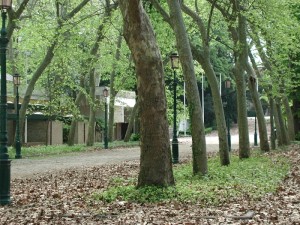 demolition of public granaries , and the prison where  were locked up the Genovese prisoner, taken during the war of Chioggia.
The buildings with the public granaries are visible on the 1500 plant of Jacopo de Barbari ,
called also “Barns of Newfoundland” because they were built on top of the backfill ground , or ” new earth “. In the Napoleonic era the public granaries were  demolished to make way to the current Royal Gardens that nowdays are also called ex Royal Gardens.

The peculiarity of the Austrian period are pergolas covered with climbing plants. The species present are the pagoda trees , locust trees , laurels and beeches , pittosporums , eleagni , oleanders, eponyms , screw of Canada , wisteria and ivy .
Savorgnan Park , (now the Institute for Tourism Algarotti ) is located in the foundations of Cannaregio , a few steps from the Bridge of the Spires and Palazzo Labia (home of Rai Veneto ) and is one of the few public gardens of Venice .
Born as a botanical garden , was part of the Palace Savorgnans , and becomes one of the most spacious gardens of the city with an area of ​​nearly 10,000 square meters of trees and chestnut trees .

The French Royal Gardens were built, by the new viceroy of Italy Eugenio Beauharnais, linked with the new Public Gardens ,Castello, (known as Napoleon garden).
The green area, commonly known as the Castello Gardens, were built in 1807 by Napoleonic decree in an area occupied by ancient religious complex. After the demolition of the buildings, the resulting materials were used to build a small hill on which was erected a coffee bar, now transformed into the Pavilion of the Biennale. The species of trees in the garden are more than a hundred: linden, hackberry, sycamore trees, privet, laurel, pittosporums, eponyms rare and exotic plants. 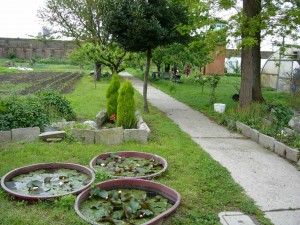 Groggia gardens
These quadrangular gardens are a Sant’Alvise (Cannaregio), and are designed as romantic gardens,of nineteenth-century . Are characterized by the presence of numerous stone elements,designed by the family Groggia. Unfortunately nowadays are much neglected and little used .

After the fall of the Venetian Republic, with the arrival of the Austrians many gardens were destroyed. The high taxes imposed on the property forced many (noble) families to give up their green space to avoid to pay so many taxes.

Visits in the secret gardens of Venice:

In a city apparently made ​of stone only , we are struck by the scent of jasmine or roses or wisteria , of its secret gardens.