The Venetian masks have a long history of protecting the identity of the wearer during promiscuous or decadent activities .Venetian masks are  Made for centuries in Venice, these distinctive venezian masks were made from paper mache and decorated with fur, fabric , gems, or feathers.The symbol of Carnival in Venice, a street show and exhibition of fantastic characters .  Masked, a servant could be confused with a nobleman,or vice versa. The Inquisitors of State and spies could question citizens without fear that their true identity could be discovered ( citizens could answer without fear of retaliation ) . The morale of the people was maintained through the use of masks, not faces, they all was “only voices”.The gambling continued throughout the day and night in the gambling houses,private homes, even in convents . The woman’s clothes was more striking ; the homosexuality , while was publicly condemned , was embraced by the normal people. Even the nuns and monks of the clergy, wore masks and dressed in disguise to hide their stories , like the majority of their fellow citizens .The following masks are some of the most used Venetian  masks during the carnival,but also well known characters of the theatre of the comedy of the art

Famous Venetian mask was born around the middle of the sixteenth century.Pantalone is a typical merchant: old, rich and stingy, lustful, filthy, hostile to the young and always mocked. Sometimes is a dealer in Vienna. A little silly, lover of the beautiful women and the food , naive, full of temperament,is the butt of all the jokes, some of them very indecent, but forgive everything in the end. It is often presented as the parent of one of the lovers and has some business relationship with the Doctor or the Captain. http://dipoco.altervista.org/venice-carnival-masks/

His habitude is to wear a large codpiece to advertise his manhood (which everyone around him know that is gone) along with a mask with a long hooked nose, a red vest tight pants and red socks, a long black cloak that covers the red tights ,slippers and a hat without a brim.

It is one of the longest-lived of the Commedia dell’Arte masks. Born suddenly, with the

birth of the comedy, passed almost unscathed through three centuries. The names Pantalone and Todero, according to some historians of the theater,have a similar derivation, in fact, to the saints San Pantaleon and San Teodoro ,the Venetians have paid a special devotion.

The character was brought to France , where became part of the repertoire of French companies with the name of Pierrot ,thanks to Joseph Geratoni who introduced him, in 1673 , but the first Pierrot was the Italian one, derived from the characters of the “commedia dell’arte” , one of the first true Venetian mask -Zanni .http://dipoco.altervista.org/venezian-carnival-masks/

Pierrot is a stock figure in the Commedia dell’Arte .Pierrot is usually depicted as cute , charming and polite , to the point of excess , is blamed for bad things he never made and for his trusting nature is often deceived . The remarkable feature of Pierrot is his naivety, he is seen as a fool, always cheated and teased by the others.Despite his suspicions about things , Pierrot always end up trusting people and believing their lies. Pierrot is also seen as a person outside of reality, in a state of unawareness of what is happening around ,is one from who don’t count anything but cheering and playing all the time .
In the French version ,Pierrot lost the characteristics of cunning and duplicity , to become the sad mime in love with the Moon.

As character Pierrot wearing white clothes, which are sometimes too big for him, but more commonly and well-equipped with accessories, sometimes blacks,with a high and pointed, or small and tense hat.His face is sometimes whitened with white powder or flour.
Pierrot is very occasionally depicted with a tear on his face, and usually doesn’t wear a mask, the actor should generally have a wide range of facial expressions. This character is played at least from the begining of the 1600. 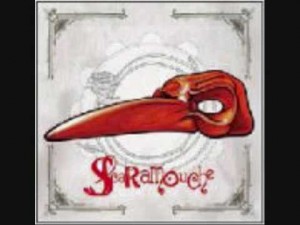 Skirmish (Scaramouche ) literally means “small , fast melee ” giving the idea of a soldier who does not involve himself too much in the battle , but his way of fighting ,is, a little touch here, a short attack there. His affinity for intrigue often landed him in difficult situations, but he always managed to extricate themselves, usually involving an innocent victim at his place.
Scaramouche was originally a variant of “the Captain” another character of the comedy .
The Captain was a young man of adventure or rather an old sailor , boasting swashbuckling , dressed to kill , feathered hat , high boots , with a sword in his belt , often Spanish ,he was always a prime favorite. He had some amazing stories about how he beat a whole army of Turks and how he took away the beard of the Sultan, but when there was a hint of real danger was the first to escape. This character , of course, is none other than the glorious ” Miles of Plautus” , called in Italian Captain Fear Valley Inferno, or simply  Fright (Spavento).More an women hunter that a soldier , a great friend of Pulcinella , always finds a way to reverse the consequences of his actions on someone else.The captain is sometimes depicted without a mask. When he use a

mask, usually has the color of the skin with a large nose and a mustache that are, or straight and wiry or raised corners. Sometimes in older versions is shown wearing a pair of glasses, even if they are used to compensate for his lack of visibility,the Captain insist that he wore the glasses “to avoid that the brilliant and fierce gleam of his beautiful eyes will outshine the sun”. Usualy wear his military uniform, multi-colored and covered with shiny buttons, but often very worn.